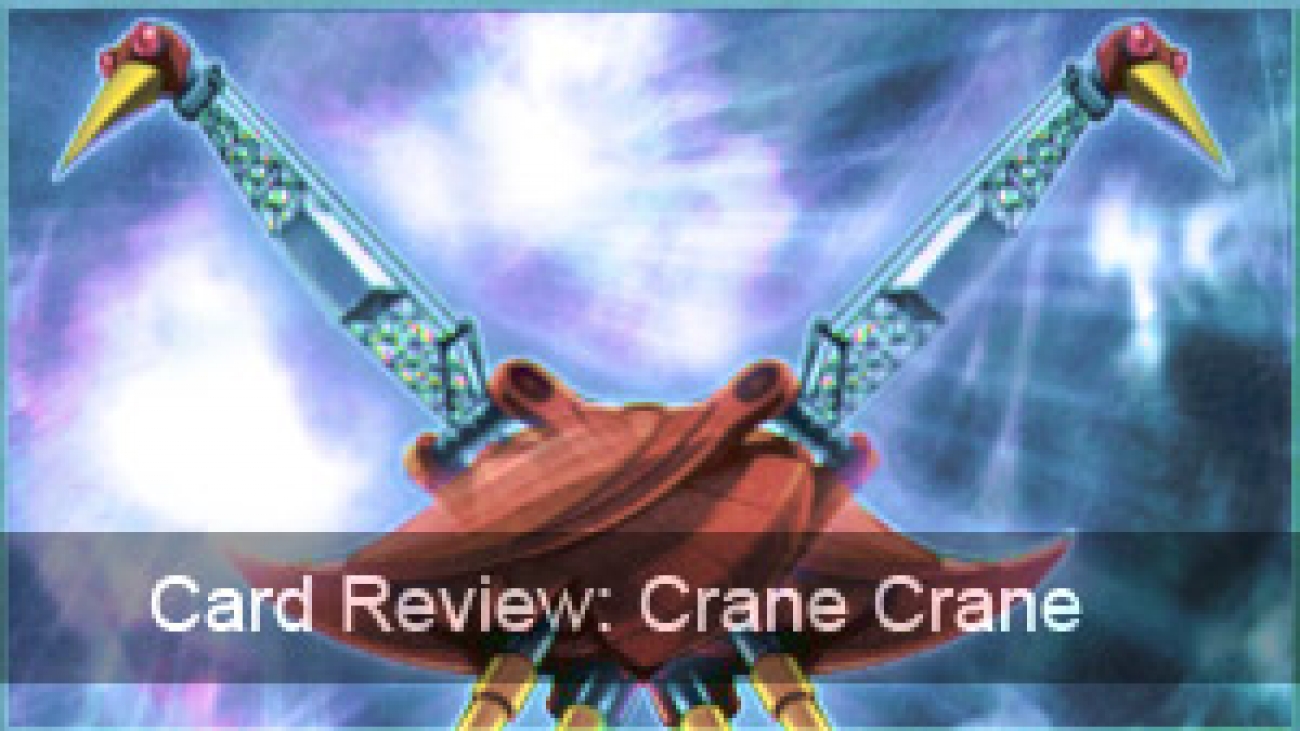 If you didn’t know about this card already, it’s time to brush up on it.

Not too long ago the Super Starter: V For Victory Starter Deck was released. I feel like it was kind of inconspicuous because nobody really said anything about it at all and it was out with little fanfare. The deck doesn’t really have many good cards to boast, but it had some interesting new cards none the less and one stood tall above the rest: (forgive me the that pun) Crane Crane.

When this card is Normal Summoned: Youcan target 1 Level 3 monster in your Graveyard; Special Summon that target. Its effects are negated. You can only use the effect of “Crane Crane” once per turn.

So what we’ve got here is in short, another kind of Tour Guide From the Underworld. A monster that upon its normal summon it spawns a Rank 3 XYZ monster. Since it’s so similar let’s first compare the two cards.

The most large difference between Tour Guide and Crane Crane is that Crane requires setup. You first must get a Level 3 monster into the graveyard, being something in particular in your deck or simply another copy of Crane Crane. (I’ll get into particular monsters later)Tour Guide can be used upon summon in any conditions. The ability of Tour Guide to be used at the drop of a hat is great, but it comes with the down side of requiring the targets to be in the deck to make the most efficient play. Crane Crane on the other hand gets the benefit of being live as soon as there’s a Level 3 in the graveyard and never is an issue with multiples in hand. (that’s not saying that drawing 3, even if they’re usable, is good)

The biggest advantage Tour Guide probably has over Crane Crane is typing. DARK is especially good when it comes to monsters that can summon Leviair simply because it has synergy with Chaos Sorcerer and the like, giving Chaos Decks a really strong DARK backbone to rely on. Although Crane Crane isn’t DARK, that’s not to say its typing can’t be beneficial. We haven’t really broke the card in yet so we can’t say for sure, but I feel as if there’s some special synergy and uses that come from Crane being EARTH.

Tour Guide brings out an extremely specific type of monster: Fiend Level 3’s. This brings the helpfulness of the cards run along side it to a minimum. The only 2 off the top of my head that are any special are Broww, Huntsman of the Dark World and Fabled Kushano. Other than that we’ve got slim pickings. With Crane Crane we can run very specific and diverse Level 3 monsters as alternative targets making it more versatile in that respect. With that I’ll get into some of the specific decks I think there’s some very interesting synergy with. First is plants. This is the one most people thought of really quickly, at least from what I hear in the murmurs. There’s 3 monsters that have some interesting use here with Plant decks: Lonefire Blossom, Dandylion and Drill Synchron.

Lonefire Blossom goes to the graveyard pretty quick so it makes Crane Crane live really quick. It doesn’t have any special plays really, but it’s an important note.

Dandylion is probably the big name here. It works similar to the Debris Dragon + Dandylion combos except with a different mosnter line-up. You can revive Dandylion with Crane Crane and make a Rank 3 XYZ. Then when Dandylion is detached it stills gets its effect to summon 2 Tokens, which is pretty fantastic. A simple Leviathan Dragon with 2 Tokens is fairly strong alone, and that’s probably the weakest play we’ve got here. Imagine Banishing Lonefire for Spore, then summoning Crane reviving Dandy to make a Leviair. Then you detach Dandy to revive Lonefire and get 2 Tokens. I’m sure you can think of all the shmexy plays that can happen after that. The amount of Token spam might even make Tytannial, Princess of Camellias a reasonable monster again. (side note, Tytannial is really good against Dragon Rulers) It also makes the card Super Solar Nutrient very strong too.

How boring, Crane Crane works with the best deck of the format? Not exactly. Why is it relevant to Dragon Rulers though? The reason is Dragon Rulers house 2 specific monsters that make using Crane Crane incredibly easy: Lightning, Dragon Ruler of Drafts and Burner, Dragon Ruler of Sparks. Both Baby Dragons are Level 3 and very easily put themselves in the graveyard to make Crane Crane live. Also, since Dragon Rulers Banish a lot of stuff, this makes Leviair plays easy to pull off if you have a specific idea in mind, which I don’ at the moment. What I will say though, is a deck using Blaster and Tempest with their respective Baby Dragons and Crane Crane has the potential to do something interesting. Maybe you’ll run Brotherhood of the Fire Fist – Bear and keep reviving it with Leviair to clear the board, maybe you’re running some other WIND or FIRE Level 4 or lower monster you want to keep reviving? All I know is it will work, I just don’t know what to do with it.

This one’s a little more of a specific monster to use with Crane Crane rather than a specific deck as a whole. That specific monster is Atlantean Marksman. I just think the idea of making a 1 card Leviathan Dragon using a Marksman is really powerful. Since Leviathan Dragon is WATER you can detach Marksman and activate Marksman’s effect to destroy a face-down card. So with 1 card you can get a 2500 beater and destroy an opponent’s face-down card. That’s not very great in this format since even setting Spells and Traps is difficult, but in a later format I’d hope we’ll set more so it’s a good idea to keep in mind. Also, Leviair seems like a nice addition to an Atlantean deck since you can Banish monsters with Tidal to fuel Leviair’s effect.

This ones pretty wild actually. I was thinking over it the other day, and did X-Sabers become really good while we where all sleeping? It seems just about every EARTH based deck in the game got wombo combos now with the release of Grandsoil the Elemental Lord and Redox, Dragon Ruler of Boulders. X-Sabers in particular gain a huge boost from both of those as well as Crane Crane, who also happens to be an EARTH monster if there wasn’t enough synergy already.

So, what monster do we bring back in this deck? There’s plenty of options since the deck runs a lot of Level 3 monsters, XX-Saber Darksoul and XX-Saber Emersblade to name a few. The one we’re looking for most though is XX-Saber Fulhelmknight.

The deck is allowed tons of mileage out of simply reviving Fulhelmknight with Crane Crane.  From that point you’re given a multitude of plays.. (sorry that doesn’t work, my bad ;P) There’s also MX-Saber Invoker, which can pull a XX-Saber Boggart Knight from the deck getting you 2 X-Saber monsters on the field so you can summon XX-Saber Faultrol, which can revive the Fulhelmknight again or some other X-Saber of choice. You can then make a Level 7 Synchro, which isn’t so bad anymore now that you can XYZ with it and Redox easily for a Rank 7. There’s also Barkion one again as well as the card Soul of Silvermountain. Silvermountain is a Rank 3 XYZ that requires 2 Level 3 EARTH monsters. It almost never comes up but it’s really powerful and having that extra option is always good. With the addition of Redox, this Crane Crane play also brings access to Leviair plays if there wasn’t enough to be doing already. Add into this mix crazy Special Summoning with Grandsoil and Redox and I think we have a bunch of OTKs coming our opponent’s way and FAST at that.

I’m certainly excited about the X-Saber idea so I’ll be trying it out some more in the future to get the idea more grounded and hopefully I can get a deck list and some specific plays for you guys in the future.