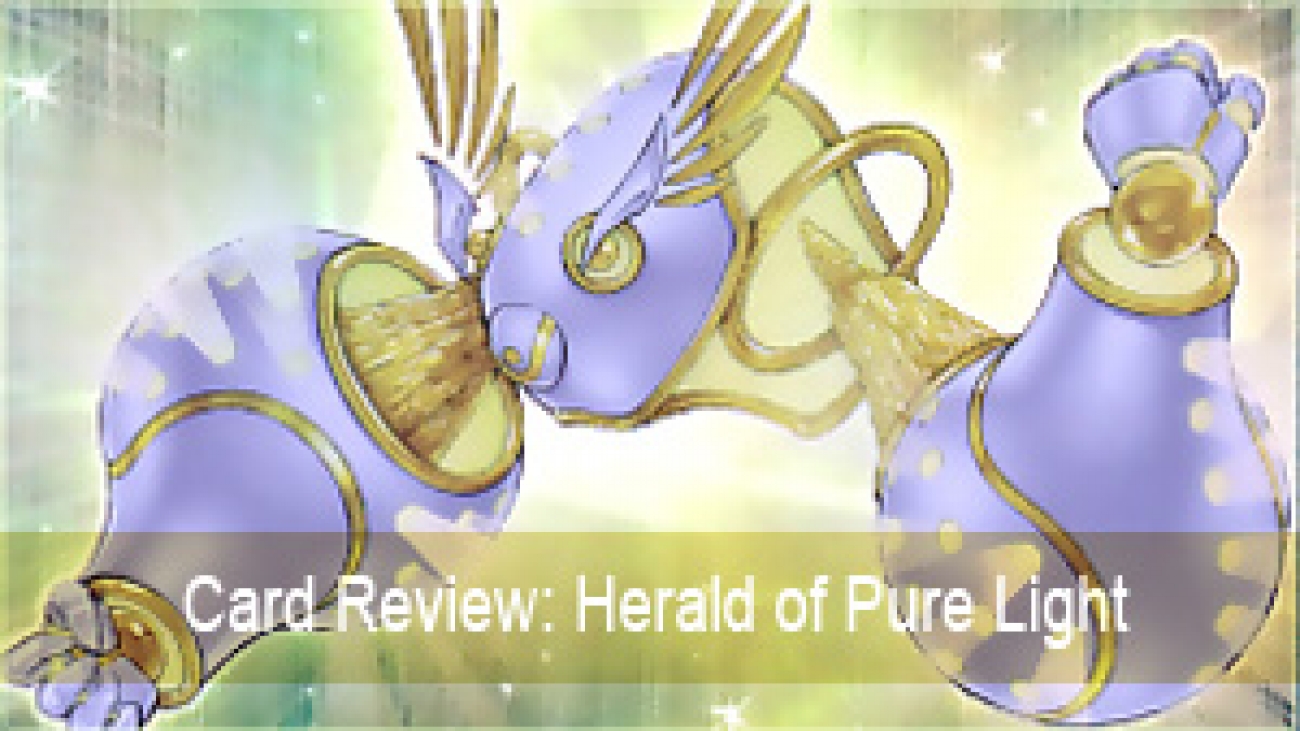 Coming out in the up an coming pack, Judgment of the Light, is a new Rank 2 XYZ monster: Herald of Pure Light. It has inspired me to many things, but mostly just Frogs. Let’s take a look at it.

Judgment of the Light is upon us, we just had the sneak peek this last Saturday or Sunday, depending on your card shop, and within this pack is the monster Herald of Pure Light. It’s a Rank 2 XYZ requiring any 2 Level 2 monsters. It’s a LIGHT Fairy-type monster with 600 ATK and 1000 DEF. It is the supposed XYZ monster made with two of the “Herald of Light” monsters, since it looks similar and also has an ATK and DEF equal to the combined ATK and DEF of two Herald monsters, so that’s kinda cute, I guess… Here’s its effect:

You can detach 1 Xyz Material from this card, then target 1 monster in your Graveyard; add it to your hand, then shuffle 1 card from your hand into the Deck. You can only use the effect of “Herald of Pure Light” once per turn.

So, it retrieves ANY monster from your graveyard, or potentially adds a monster from the graveyard to hand and then shuffles that same monster into the deck. (This may have some potential merit with cards that need to be in the deck to be effective like Tour Guide targets or Reborn Tengus etc.)

A quick ruling, the card states “add it to your hand, then shuffle 1 card…“. I’d like to point out that if you don’t actually add the monster to hand at resolution, the effect doesn’t continue and force you to shuffle a card from hand into the deck. So, perhaps the opponent chains D.D. Crow or a similar card targeting the monster you wish to add. You wont have to shuffle a card back into the deck in that case. Also, you can make this occur yourself by targeting a card that wont return to hand, like say an XYZ monster. You can activate Herald’s effect targeting say Gachi Gachi Gantetsu. Then at resolution, it’ll return to the extra and since a card wasn’t returned to hand you don’t shuffle back a card from your hand to the deck. This is according to problem solving card text. Of course this can be revoked if Konami gives us a ruling saying otherwise, but for now that’s some nice info to know.

Well, we’ve got a Rank 2 XYZ monster. What’s the best way to make Rank 2 XYZ? Frogs of course! Next maybe Agents, then probably Prophecy, Mermails and follow that up with some random decks. It has quite a few interesting interactions with The Agent of Creation Venus and Mystic Shine Ball since it allows you to put copies of Mystic Shine Ball from you hand into the deck for re-use and potentially add copies of Shine Ball from the graveyard to the hand for re-use yet again, but I wont be getting into Agent shenanigans. Continuing on, its stats are rather poor so its effect is all that really matters, thankfully it has a really powerful effect. It allows you to toolbox any monster from your graveyard, which just about any deck would love to use.

For my examples I’ll mostly be using Frogs, since they can summon Herald without really using resources, so that means you still have your normal summon and other such things to be doing during our turn. That means this is the prime way to get back Monarchs to your hand. We’ve had Constellar Ptolemy M7 out for a little bit now and this has given Monarchs that extra edge they’ve been looking for. It allows them to recycle their Monarch monsters after they’ve been summoned successfully in combination with cards like Illusory Snatcher or Sharkraken (one of my new favorites I’ve been testing out) to make Rank 6 XYZ. Then you can detach the Monarch for M7’s effect and add that Monarch back to your hand with M7’s effect allowing you to have a Monarch to summon next turn. If the M7 survives a turn you can even add back the Snatcher or Kraken under it and make another M7 for free. Now, we’ve gotten an even greater addition in the form of Herald of Pure Light. Now you can cycle back Monarchs as well as Illusory Snatcher and Sharkraken without even normal summoning a monster, which can allow you to make the M7 plays you want and create some really efficient looping within the deck. It also allows you to start up after failed plays and isn’t as difficult to pull of as the M7 play.

This promotes a much greater amount of Frog monsters than normal since you don’t need nearly as many Monarchs to be effective since you can recycle the few you’ll be drawing and also because you’ll be needing a lot of Frogs to consistently get Rank 2 XYZ. I really like this idea since more often than not when you get a bad hand in a Frog Monarch deck it consists of almost all tribute monsters. This is greatly mitigated if you’re only running 6-8 tribute monsters in the deck, in which case it’s just plain bad luck to open 6 of 8 tribute monsters. The use of a heavier Frog engine also supports cards like Salvage, Surface, Sea Lancer and even potential trap usage if a player chooses to drop Treeborn for heavy WATER engines using Tidal in which case you can recycle cards like Atlantean Dragoons or Moulin Glacia by summoning Herald using Ronintoadins and Fishborg Planters. (there’s also the whole Nimble Angler engine that just swarms Level 2 monsters)

Another really important aspect to this card is that it allows you to recycle hand traps. This means you can always be allowed to react to the opponent with the needed card(s) even if your field is destroyed as long as you have them in the graveyard. In essence you’re toolboxing traps from the pile of traps you’ve already used in the duel. This works especially well with the card Maxx “C” since Maxx “C” inherently pulls cards out of your deck (such as hand traps like Effect Veiler and Gorz) and is also a hand trap itself. This means it can get more hand traps into the graveyard and it itself is also beneficial to be toolbox-ed. As a whole this provides an Extra Deck toolbox for defensive situations. You can either make Gachi Gachi Gantetsu to prevent large destructive pushes, make Number 96: Dark Mist for decks predicated on battle or make Herald of Pure Light when you think a specific hand trap will better deal with your opponent’s next turn. This allows to Frog decks to be far more versatile with their defense tactics than before. Before Herald Frog decks would simply allow the opponent to do practically whatever during their turns and hope that a Gachi Gachi Gantetsu was enough to stop them, but now you can strategically get cards to intercept the opponent from cards you’ve already used.

About what I mentioned earlier, about running less Monarchs in the deck because they can be recycled later. This also can be applied to a whole slurry of cards that may be effective in the deck that previously you may not have had the space to run the desired amount. An example would be the card Sea Lancer. Sea Lancer never really saw a lot of usage in Frog Monarch variants because it simply took up too much space to be ran optimally beside a Monarch engine as well, but now that’s a little different. Now you can simply tech in 1 copy of Sea Lancer because it can be revived whenever and only requires 1 copy in the deck to do so. This also works for some other cards like Jinzo, Obelisk the Tormentor, Mobius the Frost Monarch, Junk Synchron, Black Luster Soldier(who benefits greatly from Herald being a LIGHT monster), maybe even random Fire King High Avatar Garunix, just to name a few potential things.

One last kind of random idea that I think would be cool. Using Frogs plus Prophecy in the same deck to make Rank 2 XYZ, specifically Herald of Pure Light and Shining Elf. Herald would recycle copies of Spellbook Magician of Prophecy back to hand and Shining Elf, being a Spellcaster-type monster, would allow the use of Spellbook of Fate during the opponent’s turn as well as the use of the card Spellbook of Miracles. Just a thought, I’ll try to get Justen to do it since he has all the Prophecy and Spellbook cards within our group.

Final notes and questions: Would you guys be interested in my “wishlist ban list” in which I would say how I would make the ban list if I was the one making it? Also would you be interested in some ideas for all common decks (decks consisting of only common cards)?

Last but certainly not least, since I like the idea and it gets me some feedback: Question of the Week, in the spirit of ban list season: What would you guys think about Black Whirlwind or Blackwing – Gale the Whirlwind being Semi-Limited or unrestricted?