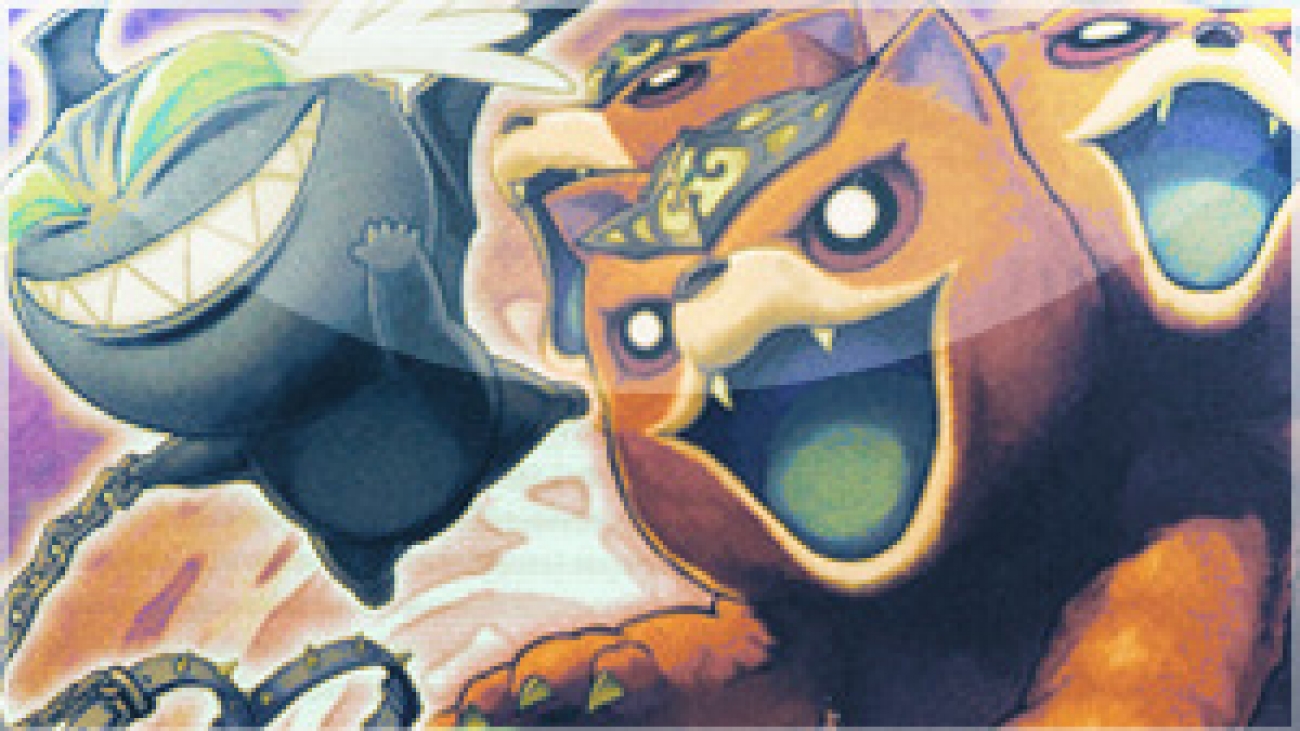 I promised an article about Behemoth the King of All Animals, but the more I contemplated what to put in my article it made more sense to make it about Obedience Schooled instead.

And now we’re here! We’ve just completed a bunch of testing with Beast-type monsters so I figured I’d take a little look at one of the new cards that really makes the deck function: Obedience Schooled. It’s a Normal Spell, here’s its effect:

If you control no monsters: Special Summon 3 Level 2 or lower Beast-Type Effect Monsters with different names from your Deck. Their effects are negated, and they are destroyed during the End Phase. If you activate this card, you cannot Special Summon for the rest of this turn, except Beast-Type monsters.

It wasn’t really a question in anyone’s mind when this card came out whether or not it was any good because it’s pretty obvious this card has some worth. Cards that summon directly from the deck are almost always fantastic, and this card summons three monsters, giving you a lot of versatility, which naturally comes with many restrictions. These are mainly just some things to keep in mind.

There are two main restrictions; the first is you have to control no monsters. Not too steep a requirement. This nicely evades the “your opponent must control a monster and you control no monsters” effect that holds a lot of cards back. Specifically, this means you can use it on your first turn.

The next restriction is you can only summon Beast-type monsters for the rest of the turn. This is the biggest restriction you have but of course it can and must be worked around in order to achieve this card’s maximum potential. Notably, it only says “for the rest of the turn” meaning you can special summon all the non-Beast-type monsters your want, before you activate Obedience Schooled. Afterwards, you must Synchro and XYZ into only Beasts. You can Normal Summon any type of monsters afterwards, which is important to note. Sometimes it’s beneficial to Normal Summon specific cards I’ll mention later that are not Beast-type.

What does this card summon?

The next most vital part about this card is what other cards do you need to run it. The most obvious cards to put it with are the Raccoon monsters, Ponpoko and Tantan. They’re Level 2 Beasts that have already proven themselves a naturally strong deck, not necessarily highly competitive, but they definitely work. There’s also the monsters pictured on the card, the Fabled Beasts. Of them you can summon Cerburrel, Nozoochee, Chawa, Peggelsus and Catsith. The Fabled Beasts have also proven themselves to be a pretty solid deck-of-old providing a solid Synchro engine and more Level 2 Beasts for the deck. Then there’s two Lightsworn monsters that are Level 2 Beasts: Ryko and Rinyan (Lightsworn Rouge). Those are the most notable Beasts of any type of archetype or theme that can be used with this card in my opinion.

Some other very interesting cards that this works with include: Mogmole, Moja, Wind-Up Kitten and Key Mouse, among others. For the most part I’ll be sticking to these cards I just mentioned though.

What do you do now?

What can you do with Obedience Schooled? The first thing is the most obvious, which is XYZ summon. Raccoons where released naught but a pack ago, so they’re fresh in our minds, and like everyone else we all thought that Obedience Schooled allows us to summon Number 64: Ronin Raccoon Sandayu. Sandayu requires 2 Level 2 Beasts, meaning with Obedience Schooled you can summon at least 1. Then, after that, if you simply Normal Summon another Level 2 Beast-type monster you can make a second Sandayu. The reason you want to do this is because this provides you with a very powerful lock down. Sandayu’s effect makes him immune to destruction as long as you control another Beast-type monster. With two Sandayus they both protect each other from destruction. It’s almost completely unnecessary to summon the tokens with his effect if you’re going first, meaning with two cards you can end you turn with 2 defense mode Sandayus, essentially asking the opponent to “break me”, which is quite hard to do for a lot of decks. The most ideal form of this play is when you open Schooled and Baby Raccoon Ponpoko.

That can provide some pretty daunting control on your turn one with only two cards. It should be said though that you should look out for Maxx “C” which totally hurts plays like this that require 4 Special Summons.

This play can be retrofitted to work specifically for Lightsworn decks because of the use of Rykos and Rinyans. Most people know what Ryko does so I’ll gloss over that, but most probably don’t know Rinyan so I’ll give her a quick showcase. She’s a Level 2 LIGHT Beast, 100 ATK 100 DEF. Flip effect: Shuffle a Lightsworn from the grave into the deck to draw 1 card. Pretty bland, but as far as Lightsworns are concerned, at the very least she counts as a name for Judgment Dragon, so if there’s an excuse to run it then it’s worth it. This new play is a combo of Lumina and Schooled plus any third card.

The strength of this field over the previous is interesting. It still provides the double Sandayu lock down, but in addition you now have three Lightsworn names prepped for Judgment Dragon: Lumina, Ryko and Rinyan. You’ve also taken, what was likely your only copy of Rinyan out of the deck, so you’ll no longer draw it. You’ve also been provided an opportunity to discard on your first turn, allowing you to discard cards like Necro Gardna, Eclipse Wyvern or other graveyard bound cards you may have drawn. Last, you’re going to mill 3 more cards in your end phase due to Lumina. It’s like a Lightsworn Christmas present!

While on the topic of Lumina, here’s a fun combo for the mini Beast decks. Cerburrel plus Lumina with a Ryko in the graveyard. This is so simple!

Next you’re given a lot of options. First, is to XYZ for Sandayu, never really a bad choice. Second, you can Synchro The Fabled Unicore, a really cool Level 4 Synchro. You can also Synchro for 5 with the Lumina (not really a great idea because you leave random Ryko on board. Last, you can Synchro for a multitude of Level 7 Synchros most notable Black Rose Dragon and the new Lightsworn Synchro, whenever that comes out. If any more monsters where already on the field the plays inevitably increase.

Speaking of Synchro summoning, you can also do a lot of different Synchro plays. For Synchros we’re going to need Beast-types since you can’t Special Summon after using Schooled unless it’s for Beasts. That leaves the Level 4 Synchros The Fabled Unicore and Kudabbi which require Fabled Tuners, Thunder Unicorn and Naturia Beast who are Level 5, Voltic Bicorn a Level 7, Lightning Tricorn a Level 8 and Leo, the Keeper of the Sacred Tree who’s a Level 10 Synchro. (There are others, but because of their restrictions or lack of utility, they’re not really going to happen)

The simplest, and potentially strongest Synchro play you can make with Schooled involves only itself, titled “first turn Nat Beasts with one card”.

This can seem like a waste of resources when you know you have plays accessible to you like the double Sandayu play, but it’s hard to claim that a one card Naturia Beast play isn’t powerful. Not to mention you can still normal summon afterward to back the play up. Potentially the most worth while way to use this play is if the opponent plays Maxx “C” upon Schooled’s activation, you can simply summon your Beasts and make a Naturia Beast only allowing 2 draws, and then you can set a card like Ryko for back-up and you’re still going strong. Whenever you can summon a Naturia Beast you can always summon a Thunder Unicorn too. It’s not all that great compared to Naturia Beast, but it allows you to run over really big monsters pretty easily, so it probably deserves an extra deck slot just for its utility.

Which the same resources as the first play for the double Sandayu you can also summon 1 Unicore/Kudabbi and 1 Sandayu instead. The only difference is that you must summon a Cerburrel when you play Schooled and instead of summoning a second Sandayu yo simply Synchro the remaining Beasts for a Fabled Synchro. This is particularly good if you have the same amount of cards in hand as the opponent for Unicore or no cards in hand for Kudabbi. You’ll be able to summon a fairly meaty token to match you Fabled Synchro as well. This combo can be built upon with cards like Chain Dog. You can summon Chain Dog from your graveyard if you control exactly two Beast-type monsters. Chain Dog is a Level 4 EARTH Beast-type monster. Here’s an expanded play:

Last are some more fun plays using Behemoth the King of All Animals. Behemoth is a Level 7 EARTH Beast with 2700 ATK 1500 DEF. Here’s his effect:

This card can be Normal Summoned or Set with 1 Tribute. In that case, the original ATK of this card becomes 2000. When this card is Tribute Summoned, you can return from your Graveyard to the owner’s hand a number of Beast-Type monsters equal to the number of Tributed monsters.

So it can be a one or two tribute monster and recur Beasts depending on the number of tributes. When combined with Obedience Schooled you can use Behemoth to backwards toolbox any Level 2 or lower Beast-type monster from your deck. Here’s an example play with only Schooled and Behemoth:

This gives you a 2000 ATK Behemoth, Sandayu and Ponpoko in hand for next turn. You can also potentially summon a 2000 ATK token. Naturally you can swap the Ponpoko for any Beast you may want to add to hand, maybe Ryko for Solar Recharge or Cerburrel to discard, what have you. Here’s another play with the same combo:

You can change this play by swapping the Key Mouse for any Beast you would want in hand, let’s say Ryko. Instead of only tributing the token, tribute the token and the Ryko and you can add back both Ryko and Ponpoko ending with a higher attack Behemoth and more cards in hand, but technically the same setup. This can be fairly interesting when using a card like Chow Chow Chan, a Level 2 Beast you can discard from the hand to negate cards like Mirror Force and Dimensional Prison, or a card like Wind-Up Kitten who you can use later to break a setup.

I have plenty of other plays, so this isn’t exhaustive, but interesting in my opinion none the less. That’s all for now though, thanks for reading!

Majesty’s Fiend, any thoughts on this card?