by Kyle
with 7 comments
ArticleSingle Card

In lieu of Summoner Monk‘s recent jump to the semi-limited section of the September 2011 banlist, I thought it would be appropriate to look at what, to some was an overlook-able  card and a change on the banlist that wont effect the meta-game, but in my book is a fantastic new addition to some overlooked decks of the past and even some desirable support for decks of the future. Here’s a look at its effect:

“This card cannot be Tributed. When this card is Normal or Flip Summoned, it is changed to Defense Mode. Once per turn, you can discard 1 Spell Card to Special Summon 1 Level 4 Monster from your Deck. It cannot attack this turn.”

I myself was very excited to see this card go to two, after playing around with a lot of decks on that 15+ hour car ride to California I found out that Summoner Monk isn’t anything like it used to be (a means to Rescue Cat)  and it isn’t even best served in Exodia decks with Royal Magical Library like it used to be.  It’s actually a fantastic first turn power card for a lot of lower tier decks and even makes up some really good OTK plays. And now,  with it at two it can be consistently drawn and even promotes some powerful first turn XYZ Summon plays in some old decks or even some late game comebacks, but overall it is just a very solid card. Let’s look at some of the good cards you can pull from your deck with its effect.

First off we have a couple of decks that already ran Summoner Monk and I’m sure they’ll be glad to see it at two. Volcanic’s, Crystal Beasts and, a deck me and Justen have been continually experimenting with, Genex Valley. The one key similarity you may notice with these cards is as soon as they’re summoned they will “plus” or gain some sort of advantage for the player that summoned it. Each of the three decks can use Summoner Monk to essentially bring out there most important combo piece by just ditching one Spell Card, which all the decks thankfully run a large amount of.

In a Volcanic deck it forms some neat combos with Volcanic Rocket. Combos like discarding a Blaze Accelerator with Summoner Monk‘s effect to summon Rocket and then retrieving the same Accelerator from the Graveyard (since Rocket can grab it from the Deck or Grave); effectively netting you a plus 1. You can also top off this combo with an XYZ summon to put immediate pressure on the opponent with a big monster like Number 39: Utopia or Steelswarm Roach.

Now Crystal Beasts, I’ve gotta’ say, is a very odd deck, at least the build I’m referring to. I had seen some of the decks cards in the past, cards like Rare Value (essential Pot of Greed for Crystal Beasts) and I was wondering if there was even a slightly good deck that could use them and I found upon a deck that only ran Sapphire Pegasus, Topaz Tiger and Ruby Carbuncle synergized with Diamond Dude Turbo. To my surprise upon testing variants in my game, the deck was very powerful and also very fun, and now with two Summoner Monks and the advent of XYZ monsters, I can see this being a very powerful deck if someone put their mind to it. I may say more about the deck in another review or on a podcast later.

The third deck, if you’ve listened to our Podcast recently you’ve probably heard Justen or most likely me goggling over, is Genex Valley. It’s a deck that combines the Genex archetype and Divine Wind of Mist Valley to perform and OTK. One of the biggest ways to perform to OTK was by getting out a Summoner Monk, and with only one that was wildly inconsistent. Now with 2, albeit not the biggest change, it is a whole new story, now you can more consistently draw into it and can also build essential plays off of it since you are far more likely to get it with two, not to mention you can more easily perform the OTK with two. (which I wont get into now) Drawing Summoner Monk in Genex Valley amounts to a whole slew of plays so I’ll just go over the basics and leave to rest to your own creativity. There’s two monsters that you can summon in this deck with Monk: Genex Blastfan and the unholy abomination, Reborn Tengu.  I don’t even want to get into the shenanigans you can do with Tengu, Monk, Birdman and XYZ monsters so I’ll just talk about one of the small plays with Blastfan. When Blastfan is Special Summon (likely by Summoner Monk) you can add a DARK Genex monster from your deck to the hand, which in this deck (and most others) is usually going to be Genex Ally Birdman. With Birdman you can return either Blastfan or Monk to the hand, depending on the situation. Returning Blastfan starts up the OTK, but you can also return Monk to reuse its effect again another turn or that turn if you haven’t Normal Summoned yet. Now both Blastfan and Monk are Spellcasters so this allows for Arcanite Magician a powerful game changing card.

So what special things can Summoner Monk bring to a deck? As you probably could have guessed it can turn some very basic opening plays (ex. Normal Summon Elemental HERO Stratos, Crystal Beast Sapphire Pegasus, Volcanic Rocket, etc.) into a Rank 4 XYZ Summon, which in my opinion is a fine addition to any deck.  It also brings Arcanite Magician, a card that is all but lost in this format, to the light of day once more. It’s a very powerful card that I’m sure any deck would welcome into the extra deck if it could consistently pull it off. Also, since Summoner Monk is DARK it allows for the Synchro Summon of yet another powerful but elusive monster: Dark End Dragon. One could easily just use Summoner Monk to summon a level 4 Tuner like Scrap Beast (Scraps are also a deck that loves Summoner Monk) and Synchro straight into Dark End or some other level 8 Synchro.

The last thing I want to talk about is some cards that haven’t even come out in America yet, one of which will be coming out in Photon Shockwave. (the next pack for us here in America) These 3 cards (No. 10: Illumiknight, Vylon Disigma and No. 16 Ruler of Color – Shock Ruler accordingly. Look ‘um up if you’d like to know the effects)  have one thing in common: they’re all Rank 4 XYZ Monsters that require 3 Level 4 Monsters to Overlay. I remember when looking at these cards for the first time I thought there would be no effective way to summon these cards and they would only come up in very obscure situations, but with 2 Summoner Monk the conditions for these monster’s summon becomes far more feasible. Why is this? It’s because of the one real difference between having 1 Summoner Monk and having 2. When you have 2 Summoner Monk you can summon the second with the first one and then use the second to summon any random level 4 and now you’ve got 3 level 4 Monsters ready to Overlay for these bad boys. Worth it? I’m not sure yet, but here’s one of the the basic ideas I had in mind.

The best way I could think to counter balance the minus you’re getting by using 3 monsters to summon 1 is by using floaters(a floater, if you didn’t know, is a monster that usually replaces itself with another card), and what better level 4 floater is there than Goblin Zombie? (don’t answer that *cough* Reborn Tengu *cough*)With the new ruling on XYZ Material (Overlay Units?) monsters like Goblin Zombie will now get there effect when removed from being material and all 3 of these XYZ monsters have effects that can immediately remove material to do something. Draw power with Illumiknight, removal with Disigma and lockdown with Color. It’ll be interesting to see any of these hit the field in competitive play.

Lastly, but certainly not leastly, here’s some ideas to keep your brain pumping out ideas for other ways to be using Summoner Monk. I love to see people come of with some cool new ideas and I hope to see some people come up with some new ones with some of these cards. (I myself have high hopes for a few of these) 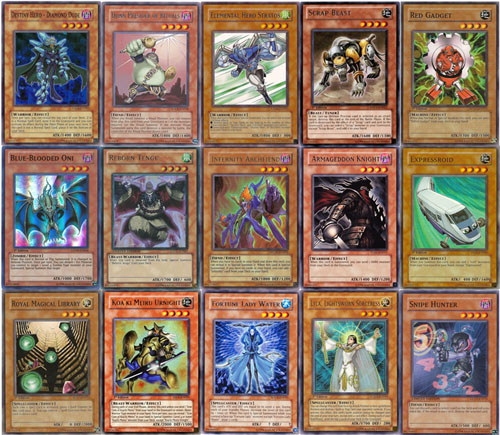 “Look at all ‘dem good cards!”

In the future hopefully I’ll be getting up a new post every Monday. So look forward to it? I guess..? -Kyle