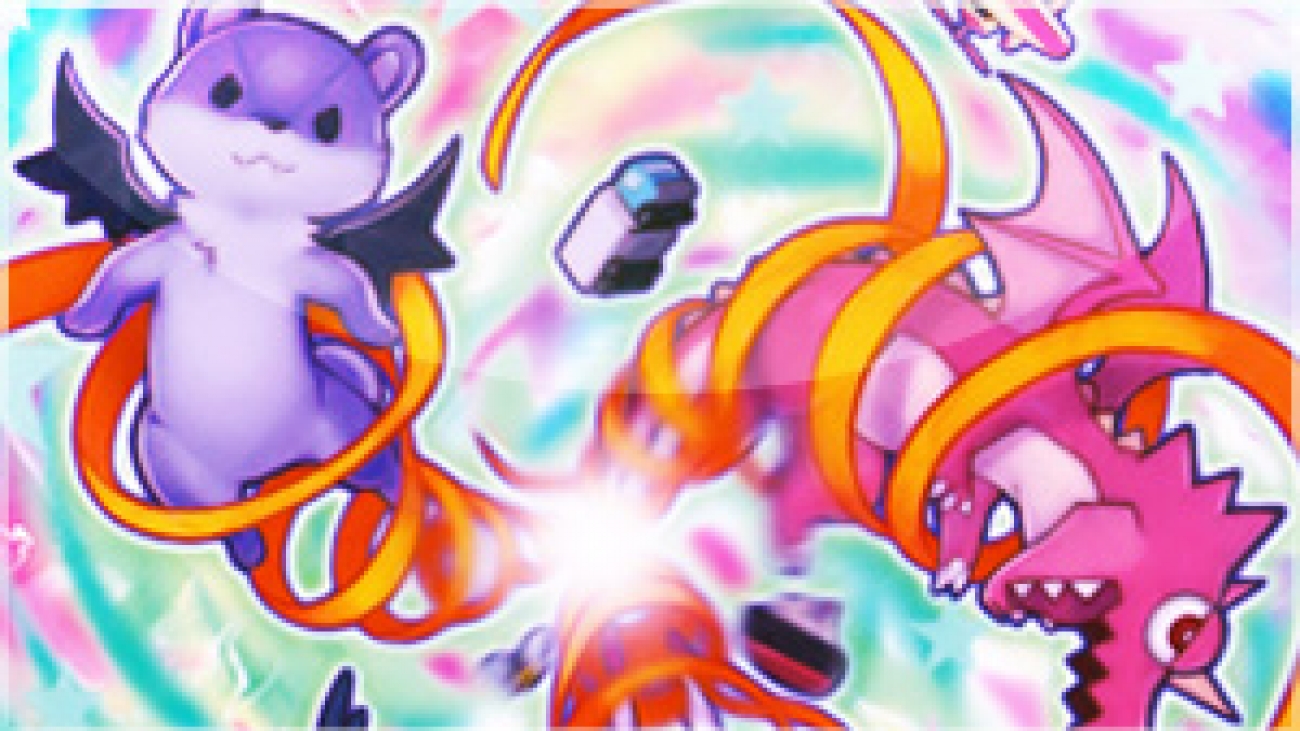 Just in time for the holidays! Stuffed animals in your stocking.

What happened exactly was, I was already playing around with this deck, liking it a lot touting its “glory” at my locals verbally, when all the sudden it actually became a relevant deck! A couple people topped with it and now here we are. Here’s the build I’ve been using, given the information I gathered from the couple topper’s deck profiles and my own experience. The side deck is a work in progress, mostly you can ignore it, but I will go over it briefly if you care for it: As far as the monsters go, it’s hard for me to say there is any possible better way to have the monster lineup in this deck. What I mean by that is that I wouldn’t want to run any more or any less of any of the monsters I currently run and there’s no other monsters I have wanted to run in addition to these. The only thing I’ve really waffled with is whether I should run 3 or 2 Edge Imp Sabres. It’s important and you need it in most games, but with King of the Swamp being a potential substitute and the ease of searching it with both Toy Vendor (which itself has 2 ways to be searched) and Fluffal Dog I’m not sure if more is necessary. In order to figure it out I just have to use the deck a lot and I’ll eventually learn how much I want to see copies of Edge Imp Sabres.

Fluffal Dog, Fluffal Bear and Edge Imp Chains are all automatic three-offs in this deck because you always want them and basically in any quantity. In the instance of Dog and Chain, you would probably run more than 3 if you were allowed. Fluffal Mouse is an obligatory three-off because you basically have to run 3 or none, and I’m running Mouse so I run 3. You could choose to run 1 or 2 Fluffal Rabbit, but I find Mouse far superior in almost every instance.

Fluffal Sheep, Fluffal Wings and Fluffal Owl are all run in restricted amounts. Both Sheep and Wings are combo pieces, meaning they have to be paired to be functional. That means more often than not you’d rather be searching for it to build the combo than opening with it, because it will increase your dead hands because they’re dead cards on their own. Both Wings and Sheep are incredible cards, warranting the usage of 2 copies over 1. Resolving Wings typically gives you ludicrous advantage and Sheep gives you a lot of looping plays and staying power. Owl kind of sucks, but sometimes you really need to access a fusion card and if you run 1 Owl that means you can access Polymerization or some form of standard fusion device with at least belated searching using literally 20 cards from your deck. That’s half the deck. Without it you only have access to fusion devices with 8 cards. At the very least, if you open with Owl you can use it as a name for a fusion summon and throw it away.

The spells are a little more conflicting or different between Fluffal decks I have seen. I’ll attempt to explain all of my choices. I run 2-2-2 for all the fusions spells and 1 lone copy of Frightfur Factory, which I don’t typically see in most deck profiles. More often than not I see a 3-3 line of just Polymerization and Frightfur Fusion. The reason I opted for less Frightfur Fusion is this:

I also additionally run 1 Frightfur Factory because it’s simply an amazing card. Once per turn it can banish a spell card with “Fusion” or “Polymerization” from the graveyard to fusion summon a Frightfur fusion monster using monsters on the field or in the hand. So basically it’s another Polymerization that searchable off of Edge Imp Chains. Why it’s especially good for my build is because I run Fusion Conscription as opposed to Fusion Reserve. Reserve and Conscription both add a fusion material monster from your deck to your hand. Conscription is a spell so it’s a little faster, but it doesn’t allow you to use the effect of or summon the monster you add that turn. Reserve is a trap card, meaning it’s essentially the same waiting period as Conscription except in the form of waiting because you had to set the trap card. Reserve has the bonus of recurring a Polymerization in the graveyard, but with Conscription you can still fusion the turn you search meaning you can more quickly do fusion plays by searching the Edge Imps as long as you don’t need their effects. As the additional bonus for running Conscription, it is a spell with “fusion” in the name meaning it can be banished for Frightfur Factory’s effect.

The Extra Deck is pretty standard in my opinion and is really hard to do anything interesting with. If for some reason you’re looking to add in some different cards, you technically only need 2 Frightfur Tiger (though I always feel a lot safer when I have 3 in the Extra Deck) and you don’t really need Frightfur Leo at all (I’m yet to even use it myself). The only one I would consider running more of would be Frightfur Sheep. Sometimes I want a 3rd copy, but it’s usually irrelevant.

The XYZ are basically the most relevant of the Ranks that Fluffals can make. Rank 6 XYZ can be done with 2 Fusion monsters and you can make an M7 to grab a Dog from the graveyard or bounce I problem card the opponent controls, etc. Rank 5 XYZ are actually pretty easy to make because every time you fusion using Edge Imp Chains for a Sheep you get to search Frightfur Fusion meaning you can almost every time use Frightfur Fusion to summon another Sheep giving you 2 Level 5 monsters. Adreus is basically the ultimate out card, being able to get rid of both problem monsters and even pesky floodgate cards. Castel is the same as Adreus except for Rank 4 XYZ. The deck has both Dog and Chain for Level 4’s, and Chain can add more copies of itself if it attacks, so it’s not to difficult to pull off when necessary. Rank 3 XYZ usually involve reviving Edge Imp Sabres and normal summoning one of the pluthera of Level 3 monsters in the deck. It’s not a pretty play, but if you need to do it then you do.

The second “standard” play is to have any 2 of Fluffal Dog, Fluffal Bear or Fluffal Wings. The play uses Bear and Wings, so if you have Dog and one of them, you use Dog to search the other an then do the play. Discard Bear to get a Toy Vendor, then discard Wings for the Vendor. Wings can then banish itself and Bear to draw 2 cards then send your Toy Vendor to the graveyard, allowing you to search any Fluffal or Edge Imp Sabres from the deck. At its core, this play is a simple plus 1, but it has multiple points where you gain a lot of advantage. First off, the play cycles you deck pretty hard and gives you a search after you’ve drawn perfecting your hand more often then not. There’s also the potential to hit either a Fluffal monsters and get a quick additional plus 1 or to hit one of the Edge Imp monsters and either gain some nice setup with Sabres or another similar plus 1 with Chains by searching a Frightfur Card. You could also hit another Toy Vendor and get a plus 1 through a second search. There’s also lastly, Galaxy Cyclone which is what I call a phantom plus 1 when milled. In total there is 24 cards, minus 3 for the 1 Toy Vendor, 1 Fluffal Bear and 1 Fluffal Wings used for the combo, making 21 potentially good cards to hit off of that Toy Vendor’s effect left in the deck minuses again any of them you drew. At that point in the that much more than half your deck that’s a good mill, meaning it’s more likely than not going to result in a plus 2. The play is then almost always a plus 3 if you used a Fluffal Dog instead of just the two without searching. So ya, do this play if possible.

If you do pull of the aforementioned play using a Fluffal Dog, if you’re going first, the play I generally feel is most optimal is to search a Fluffal Sheep off of the Toy Vendor search and use it to bounce your Dog to hand and ideally special summon an Edge Imp Chains. You could have either milled the Chains, Fusioned it away to make a Frightfur Sheep (which is reasonable to do on your turn 1 sometimes, especially since you get to search), or you simply had the Chain in hand and special summon it as a meat shield. Chains is the ideal meat shield when going first because it has relatively high defense (1800) and has an effect when sent to the graveyard, paying you back when the opponent kills it.

Another really good play is a 3 card play using Fluffal Mouse, Edge Imp Chains and either Polymerization or Dark Fusion:

You end with a Sabre-Tooth that cannot be destroyed and a Sheep that’s semi-immune to destruction. Both have an additional 400 ATK and if the Sheep ever revives itself it will come back with a whopping 3200 ATK. A lot of decks will struggle against this board so doing this turn one can be good in a lot of match-ups. At the very least the opponent will have to burn a lot of valuable resources to defeat your field. The play technically goes even as well if you consider the Frightfur Factory as a usable future asset.

Other than that, most other plays are pretty situational so it’s kind of hard for me to explain anything else. Additionally, different plays are better or worse against certain decks.

Here’s the weirdness, but at least some of it is definitive:

Comment below with anything to say about the deck or any questions!