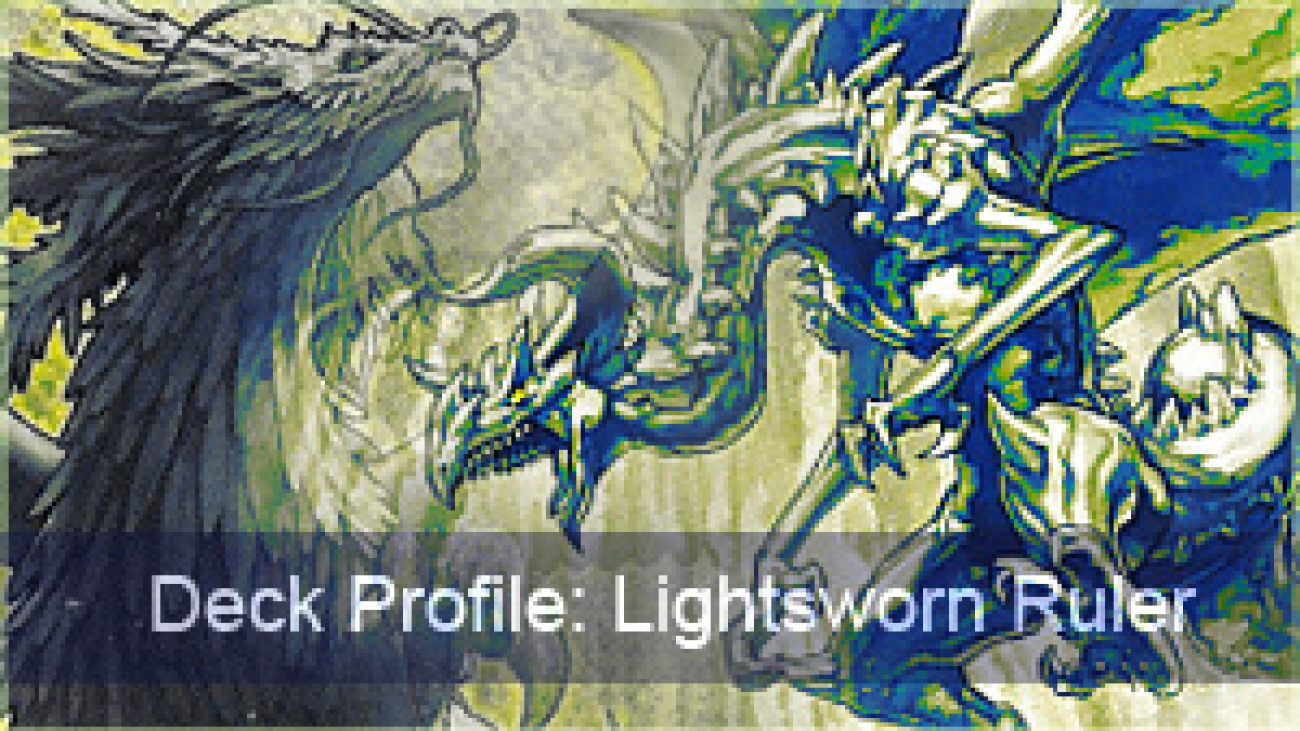 Hey, so I was experimenting with Lightsworns, seeing what I could do. Then all the sudden I had this deck that was freakin’ nuts.

I think I may have casually mentioned the idea of using at least 1 of the Dragon Rulers with Lightsworns to Matt, so ironically when I showed it to Matt he had been testing a very similar idea too. Safe to say though I think this deck is pretty nuts. Here’s the preliminary deck list I’m testing out:

And in text form:

This deck is extremely fast, it aims to accurately maneuver Judgment Dragons to your hand using the Tidal, Dragon Ruler of Waterfalls and Eclipse Wyvern and mill the crap out of your own deck during the process in order to make triple Judgment Dragon drops with ease.

The plays the deck has are all pretty simple. The first is a variation of the standard Light and Darkness play in pure E-Dragons except outfitted for this deck. The play is just simply needs Stream, Dragon Ruler of Droplets and Eclipse Wyvern and time. You pitch Eclipse Wyvern for Stream which summon a Tidal from your deck and Banishes a Judgment Dragon from the deck. If you have another Tidal in hand you can Banish the Eclipse Wyvern and the Stream in the graveyard to summon it from hand and search your Judgment Dragon. You can also attempt to mill a Tidal into the graveyard using Solar Recharge & Charge of the Light Brigade and summon it from their, achieving essentially the same thing at less of a cost. From their you can make Dracossack to defend yourself or what have you. All of which without normal summoning, allowing you to use Lyla or Lumina plays to mill your Judgement Dragon into effectiveness.

As always you want to open Lumina + Garoth. So this deck facilitates that as well for an opening play. Eclipse Wyvern, Tidal and Stream all thin the deck a whole lot making milling into more correct monsters easier and smart movement of parts with Solar Recharge and Charge can end up with you milling a good 15 cards away on turn 1 with the right hand. Garoth doubles all of this up and allows for potential draws. With all this milling it’s likely you’ll hit some Necro Gardnas which can protect your setup and allow a whole bunch of crazy combos on your next turn if the opponent can’t appropriately answer, which is where cards like Lavalval Chain and Starliege Palidynamo come in.

A card that might be questionable to a seasoned Lightsworn player is Celestia, Lightsworn Angel, and 2 copies to boot. We all know that the card is good in its own right but it has very inconsistent setup. When making this deck I pretty much made as much effort as possible to make Celestia live at all times and here’s how. First off is the monster line-up. With an opening of Lumina + just about any Lightsworn monster beside her you can mill a whole lot of cards and make it very difficult for the opponent to answer every single monster you control coupled with Necro Gardna and Honest. Also, with all this milling it’s likely you’ll hit Wulfs further the amount of monsters on your side of the field the opponent must get rid of to prevent Celestia being live. Also there’s Tidal’s effect, the reason I chose it above the other Dragon Rulers. You can pitch it and a WATER monster to send any monster from the deck to the graveyard; that means Wulf of course. This can give you a Lightsworn on the field in a pinch if you need to pull a Celestia off quickly.

Particularly, I’d like to note Gragonith. Matt has made him famous in his Chaos Ninja Dragon deck, but he has many applications here as well; he almost never gets summoned in this deck’s case though. His most integral facet is that he is a Lightsworn name for Judgement Dragon, just like all the other Lightsworn one offs. He also can be discarded for Stream’s effect as well as banished for Tidal’s summoning making him a nice pivoting point between the two strategies.

Gorz, Tragoedia, Chaos Sorcerer, BLS and other staple spell cards? That’s a no. Trag brings no helpful qualities to the deck other than stopping OTKs, which I hopefully will do first, and he only prevents me from moving as fast as I can because I drew him instead of a better card. Same goes for Gorz except he’s a little better simply for being level 7, but in testing that wasn’t helpful very often. Chaos Sorcerer and BLS are nice and all because they can Banish Eclipse Wyvern, but that’s where their helpfulness reaches its end. They’re bad mills and don’t further the deck’s strategy and without Gorz and Trag the deck’s DARK count is very low. Staple Spells suffer in the same way: they just don’t further the deck’s strategy and they sure make bad mills. Heavy Storm doesn’t mill and I can already destroy Spells and Traps pretty easily without it. Dark Hole is bad in general right now so that alone cuts it out. Monster Reborn is really the only one with potential, but I still don’t want to mill it. Pot of Avarice is bad in this deck because I want everything to remain milled.

Cards in the Testing Phase:

You probably see those Atlantean monsters and think they’re kind of weird, and they are. All the other slots in the deck are completely solidified, but I have an extra 4 slots to think about at the moment. I’ve tested a whole bunch of cards in there and firstly found I want monsters in that slot and not Spells and Traps so that my milling is more effective. Ideally I wanted cards that help me mill more, but their aren’t really any cards that fill that niche without wasting my normal summon, which Lightsworn hold oh so dear. I also decided I wanted more WATER monsters to pitch for Tidal because it’s kind of hard to pull off his effect. With all that in mind I had a couple ideas, the one I’m currently settled on is this mini Atlantean engine.

2 Marksman, 1 Dragoons and 1 Attack Squad. They give me pitch fodder for both Tidal and Stream and they don’t lose advantage when pitched. Marksman eases my game plan against decks that set a lot of cards and also provides immense pressure by just attacking. With Dragoons and Attack Squad, Marksman has 2 targets to bring out with his effect Attack Squad the most ideal because it allows for a Rank 3 XYZ, either Leviair or Leviathan Dragon. Leviathan pressures the opponent not to set cards because I detach the Marksman from it to destroy a face-down card and Leviair allows me to re-use Eclipse Wyverns into Starliege Palidynamo plays as well as Lavalval Chain plays. The Atlantean cards also double as Banish fodder for Tidal’s summoning effect since I’m not attached to them once they’re in the graveyard and they’re potentially more accessible when Banished anyway because of Leviair.

Some other cards I’ve tested that worked well include: Gold Sarcophagus, Dragon Ice and Fishborg Planter.

Some cards I’d like to test out: Monster Reborn, an extra copy of another Dragon Ruler and Light of Redemption.

That’ll be it for the deck profile! Play around with it if you’d like, it’s pretty fun. A bit of news, I won’t be posting an article next week because I’ll be away in Cali over the weekend past Monday so I wont have a whole lot of time to be writing an article. Happy dueling!