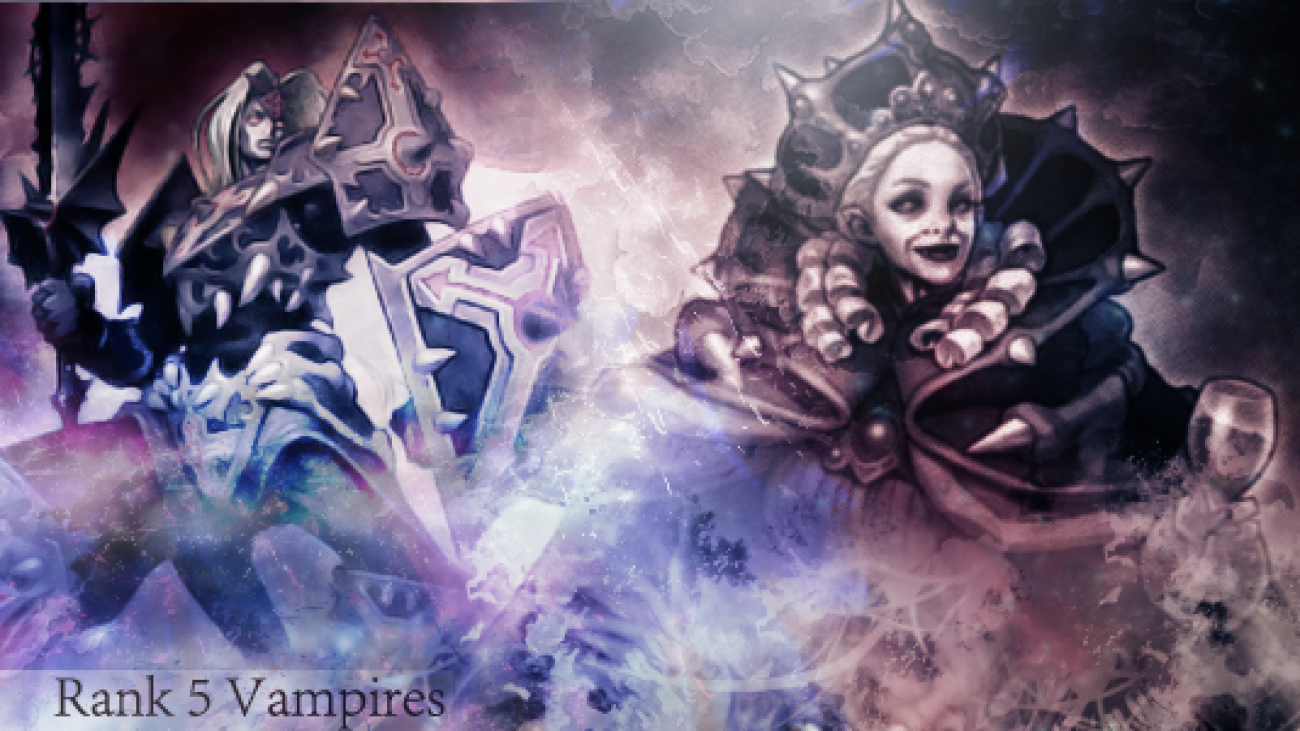 I wanted to share the Vampire build that I created while testing for our Vampire episode.

Early Game Set-up
Because all of the Level 5 (and higher) monsters are what this deck is shooting for, every Level 4 (and lower) monster is here because it brings some element of set-up that’s helpful.

Snipe Hunter and Armageddon Knight both put Sorcerer in the graveyard where he wants to be. They also move Vampire Duke and Vampire Grace there for future reverse toolboxing. Vampires always want at least 1 Duke in the graveyard so that “Normal Summon Duke, Special Summon Duke” plays can happen when they’re needed. Snipe Hunter also has the added bonus of converting your early game Graveyard set-up into aggressive 1-1 plays.

Sure, Snipe Hunter relies on randomness. But notice that the Vampires you’re setting up for are all +1s in some way or another. There are worse ways to build a Graveyard than Snipe Hunter, who may accidentally get a little wet work done along the way.

Goblin Zombie provides a great way to get Shadow Vampire and Vampire Duke into your hand since they both 0 DEF allows.

Counter Trap Dark Illusion, and Continuous Trap Fairy Box round out the Early Game Set-up shenanigans. Dark Illusion is a simple card that protects all of these Dark monsters from effects that would target them. So, you’ll be safe from D-Prison, Caius, BLS, Chaos Sorcerer, Fiendish Chain, etc.

Fairy Box gives you control of the battle phase. Even though your monsters like Mezuki and Vampire Sorcerer don’t care if they go to the graveyard, for 500 Life Points during each of your Standby Phases, Fairy Box gives them a chance to survive for like no cost. You get to do battle damage and take out a monster, or be destroyed and set up for your Level 5 Vampires. It’s a win-win for you. And if you have Dark Illusion, you can wade into your opponent’s field to do extra damage. The only thing you have to worry about is Mirror Force, and that’s not even a big deal. Fairy Box can let Snipe Hunter stay on the field for more than one turn, and in a Zombie deck, that’s scary.

Mid Game
Mid Game arrives as soon as Vampire Sorcerer is in the graveyard and you have the field spell as well as Shadow Vampire or Vampire Duke, or at the very least, access to Vampire Grace.

The most important aspect of Vampire Kingdom is that it sends your Vampire monsters from the deck to the graveyard. Without the mill effect, getting other Vampire Sorcerers into the graveyard for your Level 5s would be tedious. It also thins the deck of extra Sorcerers so that you have a steady draw of powerful Vampires to push at your opponent, while also drawing spells and traps.

The fact that Vampire Kingdom also rewards your set-up by destroying a card once per turn is the second important aspect of Vampire Kingdom. Without being able to rely on that once per turn destruction, the Level 5 Vampires would be an awkward Rank 5 engine. Instead, they’re solid, 2000-2500 attack, Level 5 monsters that you can treat as Level 4.

Mid Game is all about summoning Vampires, baiting traps, and keeping Vampire Kingdom on the field. Vampire Grace, while not part of the Rank 5 core, is a great and expendable monster. She can be pitched for Snipe Hunter and D.D.R., banished for Allure of Darkness, and used to bait out any number of your opponent’s cards. She’s like a big Snipe Hunter with Vampire Kingdom out.

Shadow Vampire can go into a Rank 5 super easily, and its the go to monster for pulling Vampire Duke out of the deck, so its the one you should be grabbing with Vampire Sorcerer. However, both Shadow and Duke can only go into Dark Xyz monsters. Here’s a list of the relevant ones that are currently available.

The problem with Shadow is that when you summon the monster from the deck, only that monster can attack for the rest of he turn. So if you Xyz or summon other monsters, just remember that they won’t be able to attack. This is one of the places where Vampire Grace comes in handy to throw at your opponent’s backrow.

Vampire Shift, their Normal Trap card, can plant Vampires Kingdom onto the field from your deck and Special Summon a Vampire monster from your graveyard. Its a great card mid-to-late game. The only issue is that you can only control Zombie-type monsters, so Snipe Hunter, Armageddon Knight, Lavalval Chain, etc can’t be on the field when you activate it.

End Game
The End begins about the time Crimson Knight Vampire Bram hits the field. You’ll discover quickly that there’s almost no reason not to summon Bram. As long as he doesn’t get bottomless-ed, he’ll be there turn after turn.

Because Bram is revived during the next standby phase after it’s destroyed, it could be tempting to use him as tribute fodder for other Vampires. But I think he’s more valuable as a permanent wall.

Bram can also revive any monster from your opponent’s graveyard (assuming they can be properly special summoned in the first place). This effect alone gives Vampires their extra tribute fodder so trust you don’t have to waste Bram.

You can consider running extra deck monsters you normally wouldn’t be able to summon, like Black Rose Dragon or Stardust just because a Level 2 or 3 Tuner might be available to you. Even XYZ monsters are up for grabs. I decided to run up Constellar Ptolemy M7 just because I kept stealing Chaos Sorcerers.

I really enjoy the way Rank 5 Vampires play. They have cool, consistent plays built into their style, with effects that are pretty competitive with what’s currently out there. While their reliance on Vampire Sorcerer would be a big Achilles heel for highly competitive play, I think its a great deck for the online or locals level.