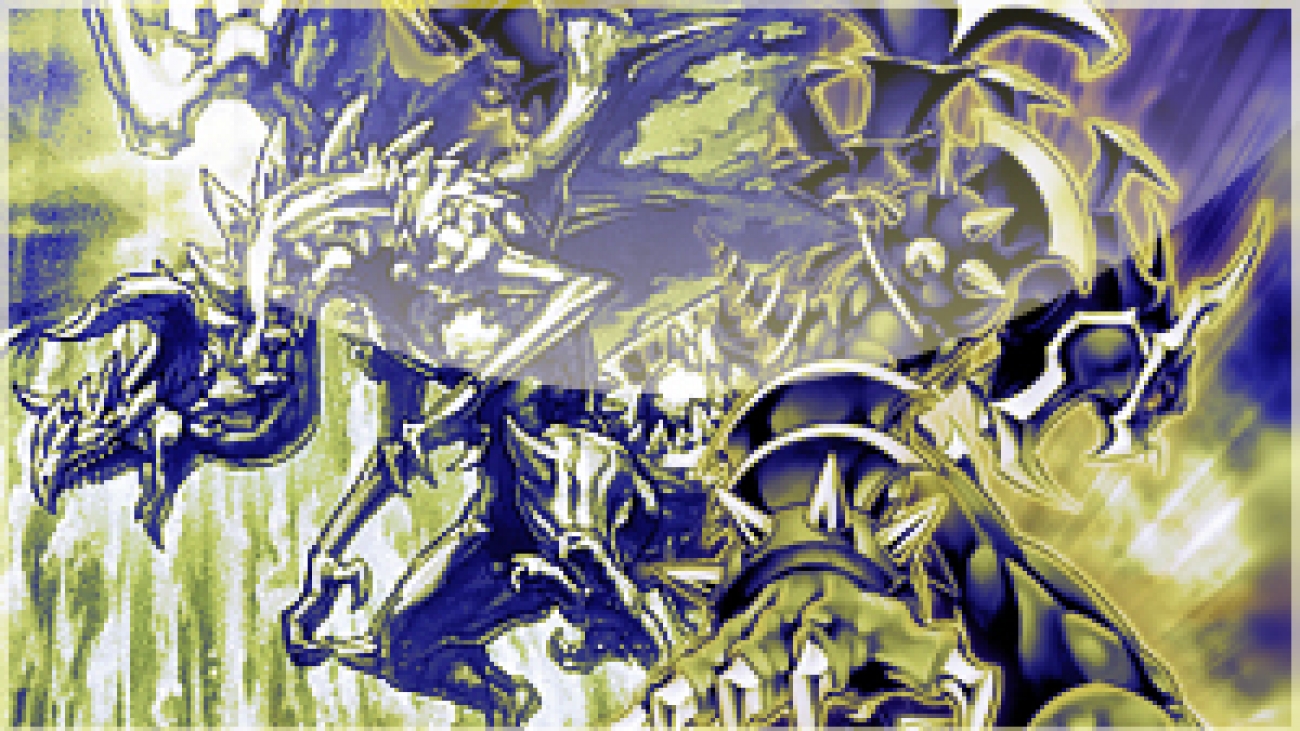 by Kyle
with 3 comments
Deck ProfileEnginesWritten by: Kyle

This week I’ve got a kind of fun and original, but certainly competitive, deck profile featuring Dragon Rulers and Dark Armed Dragon.

The idea behind this deck kind of began as an offshoot of my Lightsworn Rulers deck. Once Kuribandit came out, I had thought that I could probably withstand the use of Dark Armed Dragon in my deck now. The problem with that was, while it was true I could facilitate the use of Dark Armed Dragon with the new Kuribandit, it made the Lightsworn Ruler deck so incredibly cramped that it wasn’t nearly as functional. So I then set off on a journey testing lots and lots of different Mythic Ruler decks so I could get a mental handle on how the deck functions. I then took that information and amalgamated it with my Chaos Dragon Ruler heuristic I had gained from my Lightsworn Ruler deck and completely dropped all Lightsworns from the build. What I was left with was this weird Mythic Ruler deck that had a lot of DARK monsters in it. After a lot of testing I attempted to hone the deck and came to this build you see below. I certainly don’t think it’s completely polished, but I thought it was cool enough to share with you guys, since I’ve been quite happy with the overwhelming success this deck has been showing. First order of importance, the purpose of this deck is not to play like a standard Mythic Ruler deck. Playing like that is all good and fine, but I’ve made a lot of my card choices for a certain different motive. The design of this deck is to as easily as possible summon a Dark Armed Dragon on my second turn, destroy everything and then attack for game. It’s basically a Dark Armed Dragon turbo deck.

Dark Armed Dragon is accessible to you from anywhere except when banished. You can search it from the deck with Eclipse Wyvern, by either milling it with Kuribandit, Card Trooper or Needlebug Nest or by sending it specifically with Darkflare Dragon. You can also discard Eclipse Wyvern from hand using Darkflare Dragon or Divine Dragon Apocralyph. If Dark Armed Dragon is in the graveyard you can recur it with Divine Dragon Apocralyph’s effect. This can be done by simply normal summoning him or you can banish Apocralyph with a Dragon Ruler/Darkflare and revive him with Leviair using a Tour Guide From the Underworld. It’s all really a matter of planning.

Dark Armed Dragon is also exceptionally easy to setup in this deck. There are 12 DARK monsters in the Main Deck, not counting the Dark Armed Dragon himself, with the addition of Queen Dragun Djinn and Ghostrick Alucard in the Extra Deck. That’s 30% of the deck. Two of these monsters, Darkflare and Tour Guide, also have the potential to pull extra DARK monsters from the deck into the graveyard, meaning you can push DARKs when you’re low. 6 of the Main Deck DARKs are Dragon-type meaning you can remove them from the graveyard to summon Dragon Rulers when your DARKs are too high. You can also remove DARKs for the summon of Darkflare Dragon and with Darkflare Dragon’s effect to banish a card in either player’s graveyard. It’s pretty safe to say that your DARK monsters are very malleable in this deck.

Some people may be looking at the deck and wondering, why not run Dragon’s Shrine? Flamvell Guard? Cards of Consonance? Trade-in? etc? the standard Dragon Ruler fair.

Hopefully I can sum this in one simple explanation. Basically it comes down to this, the standard Dragon Ruler cards only work as effectively as I would desire when used completely. Also, they take up a lot of space, that I’d wish to use for other things. I also really don’t like the idea of running Card Trooper and Kurbandit with such high Spell and Trap counts; it befuddles me because it seems most advantageous to run Kuribandit in a monster-mash-esque deck with low Spells and Traps than anything else.

So the first bit, when you run the standard tech you must run all of it. Inherently, the standard Dragon Ruler engine requires that you run almost all of the cards within it because it loses significant effectiveness with each piece removed. (I also find the engine rather inconsistent with the potential for very bad hands since the engine relies heavily and a combo-draw-engine style, with multiple pieces that are only valuable for being discarded) First, there’s Dragon Shrine; it’s great, because it gets you exactly the Dragon Rulers you need into the graveyard, but it requires the use of Normal Monsters to be completely effective or you may be running dry on banishable Dragons for your Dragon Rulers faster than what’s helpful. This predicates the use of Flamvell Guard, most likely 2 copies so you can potentially have 1 in the deck for when you banish Blaster. Now we’ve got these Flamvell Guards in our deck, which pretty much suck balls when you start drawing them, they give you really slow starts if the rest of your hand isn’t completely optimal. This then presupposes the use of Cards of Consonance. With just 2 Guard (which may preemptively be sent to grave with Shrine) and 1 Debris, you don’t really have a lot of targets for Cards of Consonance, which means you’ve got to run more. This means either Influence Dragon, White Stone of Legend or some other stinky card.  White Stone means you’re now running at least 1 Blue-Eyes White Dragon, which means you now have to run Trade-in. That means this engine is at minimum 10 cards, potentially more.

So, instead of that engine I made my own to suit my play style a bit more. The Shrines were replaced with the Needlebug Nests. I didn’t want to have to run the Guards, plus I wanted to mill more than just Dragon Rulers, giving me more DARK monsters as well as about 1 Dragon Ruler each time Nest is played. I also wanted to potentially see LIGHT and DARK monsters together for the summon of Darkflare. All of this made Needlebug Nest a far better fit than Shrine. All this, plus I have a lot of experience of how to most effectively build decks to utilize Nest because of Lightsworns, so it was much more comfortable.

The dumping from Shrine, Cards of Consonance and Trade-in was also substituted by Darkflare Dragon. 3 Darkflare and 3 Needlebug Nest takes up a lot less space than the minimum 10 card standard engine and it better serves the purpose of summoning Dark Armed Dragon.

Veiler is the easiest, so I’ll start with it. The deck is pretty lacking in LIGHT monsters in order to summon Darkflare Dragon. Effect Veiler already has some pretty inherent synergy with the deck so it was one of the first testing cards for LIGHT monsters in the deck. It has its basic effect to negate monster effects, which is great. This effect also easily puts it from hand into the graveyard without using up my normal summon. You can also Synchro for 8 using it and a Dragon Ruler when in a pinch. It also replaces the role of Flamvell Guard in the Debris Dragon plays tat required it.

Rainbow Kuriboh is kind of the same situation as Veiler. It’s a LIGHT monster which I needed. It easily can ditch itself from the hand to the graveyard and provides a lot of additional defense. Most importantly though, is it is a millable and discardable monster. With the 3 Needlebug Nest, 3 Kuribandit and 2 Card Trooper you will certainly be milling. Rainbow Kuriboh in combination is a practical way to make free defensive advantage, while also doubling and Darkflare Dragon fodder.

Tour Guide From the Underworld makes a lot of sense in my opinion too. A lot of people naturally lept to putting this card with decks that run Kuribandit, which is a fair assumption. It’s particularly nice in this deck for two reason: One, it’s DARK so it facilitates Dark Armed Dragon. Two, it can summon Leviair the Sea Dragon and this deck can banish specific monsters really easily. I already mentioned that you can revive an Apocralyph to get back your Dark Armed Dragon, but there’s a couple other plays of note.

Apocralyph pretty much has the ultimate in synergy with Red-Eyes Darkness Metal Dragon (I’m pretty sure in the past I made an article about it!). Apocralyph can discard unwanted cards from the hand, like Dragon Rulers, Eclipse Wyvern, Rainbow Kuriboh or additional DARK monsters for Dark Armed Dragon to add back power cards, like Debris Dragon, Dark Armed Dragon, Red-Eyes Darkness Metal Dragon (REDMD) and Darkflare Dragon; the ladder 3 being usable almost immediately. When grabbing back REDMD, you can simply banish the Apocralyph to summon REDMD and revive a Dragon monsters.

The easiest play is to banish the Tree Dragon to summon a Dragon Ruler. Then, you can use Tour Guide and Leviair to revive it and then special summon a Water Dragon from the hand. This works very nicely if you started to game off by summoning Tree and Water Dragon and made a Felgrand that eventually died and you drew into another Water Dragon, or searched another off of Tidal.

Similarly, if you opened Tree and Water Dragon into a Rank 8, and they’re now both in the graveyard, you can do another play using a Debris Dragon and Mythic Water Dragon in hand.

You can also use the second Water Dragon to XYZ with a Scrap Dragon you summon by using Veiler plus a Dragon Ruler, or you can destroy the special summoned Water Dragon with the Scrap Dragon, it’s your choice.

Other than that, have fun!

The pre-release for Primal Origin was just over the last couple days. Did you get any good pulls? Anything cool happen at the event? Discuss in the comments below!