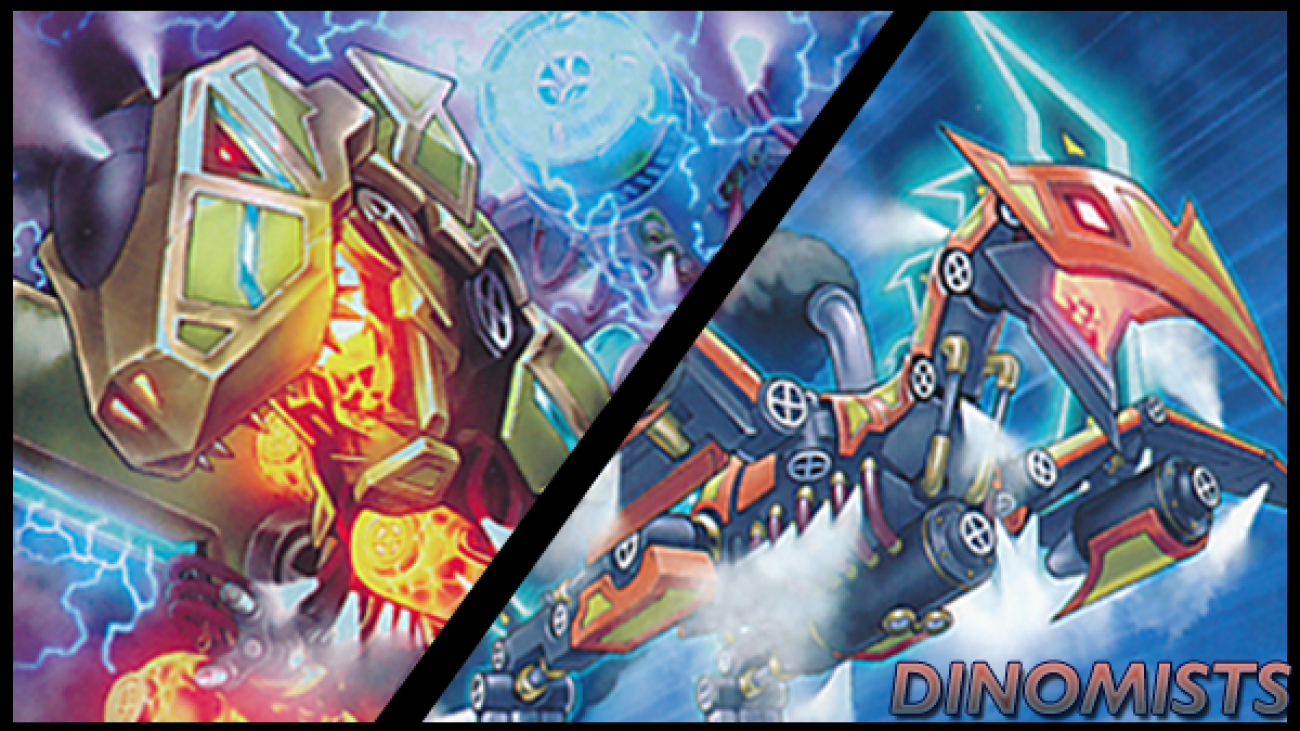 I can’t believe how easy the Dinomist archetype is to use. Without any real thought, I shoved the entire Dinomist line-up into a build, including their spell and trap support, added two or three fun cards, and called it good.

Update: I took Dinomists to regionals.

Because Yu-Gi-Oh! can’t survive without breaking its own rules, I knew that Dinomists were going to have some broken strategy up their sleeves – and I was right.

Dinomists are an archetype of Pendulum Monsters that allow the summon of level 4 and 5 Monsters with their 3 and 6 scales. They are Water Machine-type, and they come in a mix of Level 4 and 5.

They have two Pendulum Effects that make up their gameplay-style, I call these effects Mist Armor. They allow you to protect your Dinomist Monsters from destruction or targeting effects by destroying one of your two activated Pendulum Monsters.

Scale 3 – Pendulum Effect: If another “Dinomist” card(s) you control would be destroyed by battle or an opponent’s card effect, you can destroy this card instead.

Scale 6 – Pendulum Effect: Once, while this card is in your Pendulum Zone, you can negate an activated card effect that targets another “Dinomist” card(s) you control, then destroy this card.

The Dinomist theme is really solidly constructed. At first glance, all of the Monsters seem weak, and none of their effects are even slightly broken, but in playing the archetype, you learn they have one really powerful advantage.

Dinomists Own The Battle Phase

Their field spell, Dynamic Powerload, prevents your opponent from activating anything while a Dinomist Monster is attacking or is attacked. No Mirror Force, No Honest, nothing. Of course, when you enter the Battle Phase, your opponent has one last chance to activate something, but after that, the floor is yours.

It’s crazy, because there’s all this focus on doing as much set-up as possible so that the unpredictable Battle Phase doesn’t ruin you. Reading your opponent, knowing what defensive options they could run, choosing the right time to strike – all of those things are still important – but once you enter the Battle Phase, you can take a breath. The hard part is over, the bloodbath awaits.

At this point, the Dinomist Strategy is focused on anticipating your opponent’s plays during their Main Phase, appropriately using Mist Armor to protect your monsters on the field, getting their Search Card/Continuous Spell Dinomist Charge, and getting the Field Spell, Dynamic Powerload and, when necessary, Xyz Summoning monsters like Castel, the Skyblaster Musketeer and Cyber Dragon Infinity to remove monsters that can’t be removed during the Battle Phase by attacking.

There are no wasted monsters in Dinomists. Everyone of them has a purpose or a place in helping the Dinomist-engine function.  The two that I would say are the most important are Dinomist Plesios and Dinomist Petra. Separately, Dinomist Plesios lowers the attack of your opponents monsters by 100 for each Dinomist card you control. This is great because it includes itself,  the two pendulum monsters you’ll have,  and their Continuous spell search card,  Dinomist Charge. That’s at least 400 off of each monster your opponent controls, and you’ll also be protected from cards that target and cards that destroy with Mist Armor. Dinomist Pteran is their searching monster. If it destroys a monster by battle,  you can search for a Dinomist card in your deck and add it to tour hand. This includes their traps and their continuous spell,  but not their field spell, and of course all of their monsters. Most of the time, picking the continuous spell is the best option,  since you can just play it and search for the monster you want, and that fuels Plesios, but sometimes their trap is a better option.

Together, Dinomist Plesios and Pteran are the driving force behind securing a win with this deck. Having multiple Plesios on board is just killer,  all of your opponent’s monsters have their attacks reduced by about 1000. Combine this with the unstoppable attacking provided by Dynamic Powerload and the security provided by Mist Armor, and these dinosaurs just eat everything.

I’ve mentioned Dinomist Charge a lot,  but never really talked about how much of a staple it is for this archetype and Mist Armor.

Mist Armor forces you to destroy an active Dinomist pendulum monster to protect what you have on the field, and it’s actually awful unless you can convert that into beneficial plays or advantage. Dinomists don’t really have plays, they’re a very straightforward archetype, so losing vital Pendulum pieces is just bad. Dinomist Charge changes all that because in addition to providing you a search tool, during either players turn, it returns the first Dinomist Pendulum Monster sent to the extra deck to your hand. This cuts down on how draining Mist Armor is to your card advantage and reduces your reliance on planning to have two Pendulum monsters in your hand in case your opponent gets rid of both. It gives you permission to overextend a little bit so that you can keep your troops on the field.

One thing to note: if you have more than 1 copy of Dinomist Charge active, they do not stack their effects. The return to hand effect is only once per turn. Dinomic Powerload is obviously a great card. It gives Dinomists a tool that so many other battle archetypes wished they had. It’s kind of absurd. Dinomists are already pendulum monsters, so nothing short of returning them to the deck or banishing them matters since they’ll come back. Then you layer on Mist Armor, so now the opponent has to be running the right type of cards at the right time to even dent a big assault. And after all that,  should they have some kind of battle phase surprise,  this field spell says no, and Charge and Petra ensure you’re set up for next turn due to their recovery and searching. Dinomist Rush is a “summon from deck, destroy during the End Phase” trap card. The twist is that the monster is unaffected by other card effects. This is great for bringing out XYZ material, the final bit of damage when attacking for game, or during your opponent’s turn to prevent excess damage. It’s just…a good card.

These others don’t break new ground in Yu-Gi-Oh, they provide Xyz options for the deck and ways to get over problem monsters.

Dinomists have no thematic way of recovering Monsters from the graveyard, so XYZ Summoning has to be done with a purpose, otherwise you just bleed cards since your new monsters won’t benefit from Mist Armor or the field spell. The only monster that I really think is worth it is Cyber Dragon Infinity. It provides a ‘once during either turn negate an effect’ ability by detaching a material. It also has the ability to turn an opponents attack position monster into a material. This allows you to remove monsters from the board that can’t be attacked over for whatever reason and provides cover and negation for you if the field spell or Mist Armor aren’t up and running.

Number 101: Silent Honor ARK and Castel the Skyblaster Musketeer are OK options in the level 4 space, but it’s  very tough to give up Plesios and Pteran, though I would give up Pteran to get a better position if I had to choose. These are just a couple options for Extra Deck Monsters. I didn’t get to creative because, well, I didn’t have to. The deck can take care of itself pretty well.

One other interesting extra deck monster is Gear Gigant X. It can search the level 4 Monsters from the deck, or recover lost ones from the graveyard. Ironically, you have to use level 4s to make it, but at least taking from the deck thins it. I guess that’s just something I find appealing.

I played against Burning Abyss, Blackwing, Bujins, and Qliphorts, and after learning what to watch out for, they were really easy…except for Qliphorts.

What I figure is that any Pendulum or OTK deck will give Dinomists trouble because, in order to take advantage of Mist Armor, your opponent has to be running chainable spells and traps. The more of them they draw, the less effective their Monsters become against Dinomists. But if you’re fighting Pendulum decks, then the win is more about whose mechanics are stronger and who went for the right cards when, and money.

Qliphorts specifically were an issue because they can run Skill Drain and Lose a Turn, and their Monsters default to a higher attack, and tribute Summoning them is very disruptive, and they set-up slightly faster. Also, Saqlifice forces some awkward situations, like going into an XYZ early, or using Dinomist Stegos, the monster that turns other monsters into bombs, to clear the field.

To summarize everything I’ve said: Dinomists are fun, well designed in theme and mechanics, and hold their own very well against non Pendulum decks, and decently against Pendulum decks.

With the ability to ignore the opponents effects during the Battle Phase, it gives them an amazing opportunity to be a great deck. As a mostly monster Archetype, they seem like they have the potential to become very creative.

But, as an unbroken, attacking based deck, I’d like to see them get at least two more monsters, one that recovers up to two monsters from the graveyard, and one that banishes a monster who (at least) attacks it, but it would be great if it could banish when attacking because, right now, Dinomists can’t survive without Cyber Dragon Infinity, Castle The Skyblaster Musketeer, or Number 101: Silent Honors Ark to remove problem monsters on the spot.

The Dinomist Deck of Testing The Dinomist Deck I tested. Can you tell I got tired of Qliphorts?

If you’re looking for support ideas, check out Dinomists and Deskbot 001.

Here’s me using it against a guy running future Monarchs.

Have you put together a Dinomist deck in anticipation of their release? What did you do differently, what have you liked about them so far? I’d love to see this theme’s future unfold, and I’d love to hear from people supporting. You can also reach out to me on twitter @mattcarterwa .