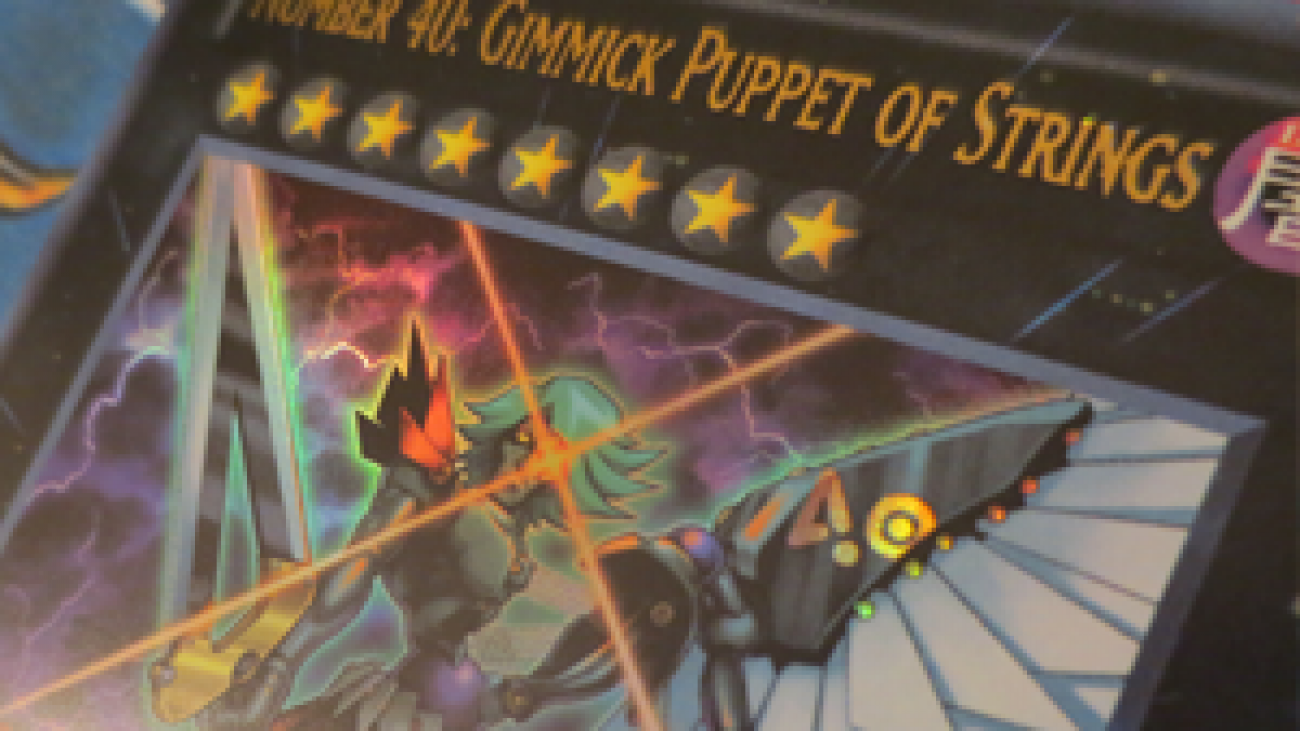 by Matt
with 4 comments
ArticleSingle CardWritten by: Matt

Generic (any two monsters) Rank 8s have a very small card pool. There’s Gimmick Puppet, and then there’s Heliopolis, a 3000/2400 monster that detaches a material to then tribute any number of monsters from your hand or the field, destroying an equal number of cards on the field in the process. So, it turns every monster in your hand and on the field into immediate 1 for 1 destruction. That’s it. These are the options until

The question is, this, or Heliopolis? Heliopolis provides immediate field control at a high price. It’s essentially tailor made to protect itself, destroying your opponent’s problem monsters and spells and traps, allowing you the chance to attack more freely.

Gimmick Puppet takes this concept and sort of plays with it. For no cost, it can destroy all other face-up monsters on the field, kind of like Thunder End Dragon. But, to throw some balance in, it must wait until the End Phase of your opponent’s turn. The card text on Gimmick Puppet “If you do, during your opponent’s End Phase:” means that it’s an effect that requires this card to be face-up to trigger. So if your opponent deals with it, you’ll both have all of these String Counters on your monsters.

There are several other inherent problems with Gimmick Puppet. First, your opponent can XYZ with the affected monsters to remove the counters. Second, it can be flipped face-down or removed from the field, preventing its destruction effect from firing. And for 500 damage, which is a blanket amount they seem to give cards, its just hard to justify summoning it at all. If it was 600 or 700 damage, it would be a more well rounded threat.

However, in the right deck, like Darkworlds, it can be a huge annoyance. Since its so easy to summon, you could use it to bait out the cards your opponent would use on your Graphas by having it sit there. No need to deplete your hard earned hand, or sacrifice any of your monsters. Let your opponent use cards or suffer the consequences. As long as Strings survives, you can deal with whatever they choose to summon on the next turn by using its effect again.

Strings also kills monsters like Elemental Hero The Shining and Lightpulsar Dragon, and robs them of their effects. “Destroys the monsters with String Counters, and if you do, inflict 500 damage to your opponent for each monster destroyed.” Since the last action in this effect is inflicting damage, all “when…, you can…“ effect monsters miss their timing, an ability Heliopolis lacks.

I believe a monster like Strings might have benefited from having its effect prevent it from attacking. There’s this silly urge to do as much as possible with cards like this, but Gimmick Strings is a more methodical, and versatile option than I expected. You don’t drop it like you would Heliopolis, and expect to win instantly. Gimmick Strings slowly pecks at your opponent, giving you an increasing amount of control over their actions and the tempo of the duel.