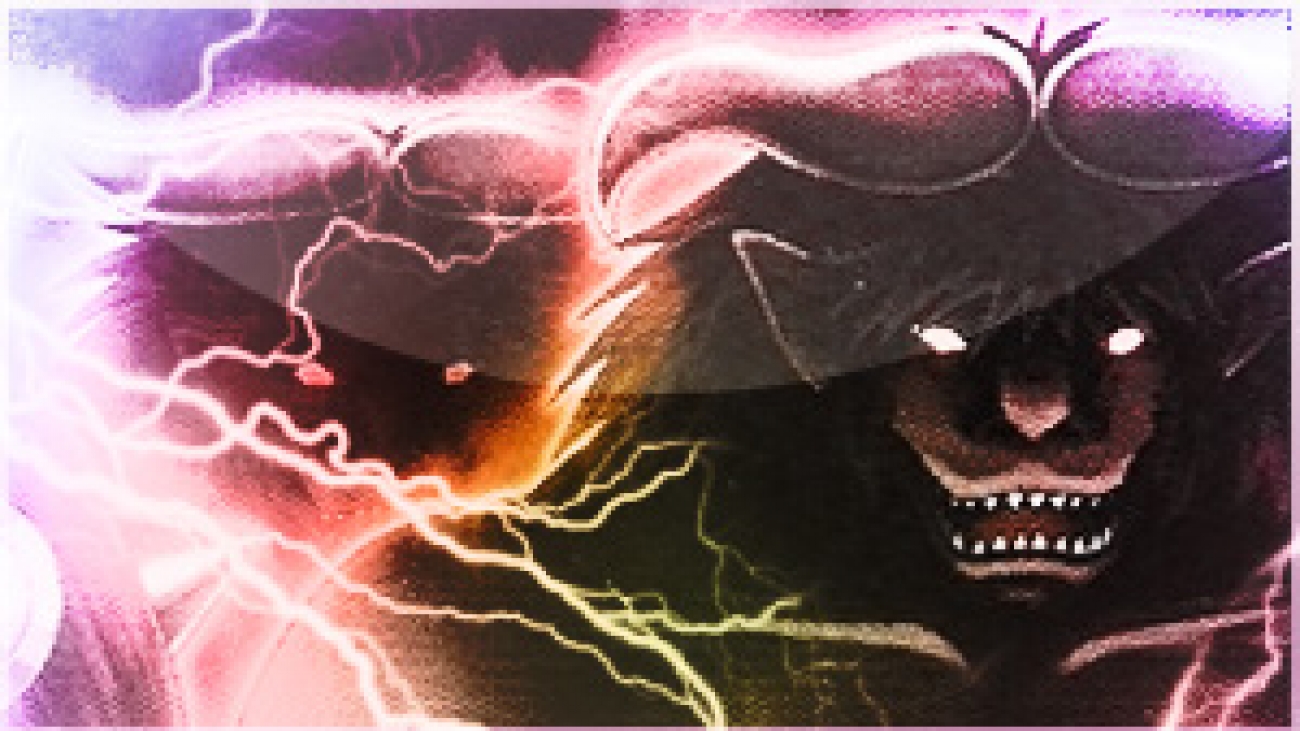 So, I had some ideas that congealed into one full idea of a Dragon Ruler deck that uses Ninjas. It’s boring from the surface, but pretty silly and awesome in the Oreo center.

I’ll say each of the ideas in separate and then the ideal in full at the end. The first idea involved the card Number 74: Master of Blades. This card gets very little respect on the competitive scene because he’s outclassed in many ways in the new Dragon Ruler builds. You don’t make Rank 7 XYZ nearly as much anymore because it’s more difficult without the baby Dragon Rulers, leaving most builds with 2 Dracossack and 1 Big Eye as their only Rank 7 XYZ. A lot of “pros” frown upon Blades as well because he locks your Dragon Ruler monsters underneath him since you likely wont get his effect, since it would be illogical for the opponent to target Blades, unless they want to lose.

It has some redeemable qualities though against specific decks, say Frog Monarchs, where just about every XYZ or Synchro you could make would be utterly useless besides Master of Blades, so that’s a plus. The reason I am drawn to him in a way though is simply because I’m not willing to cough over the dough for the likes of Dracossack so that means we improvise because I have 2 Master of Blades. It was either him or find a way to bring out lots of Tidal for Mermail Abyssgaios, which is really hard now without Stream. This lead me on a great search for ways to implement Master of Blades to his maximum potential, which essentially means cards that I can beneficially target him with to activate his own effect and I’ve come up with 3 cards: Book of Moon, Forbidden Lance and the most specifically interesting one Skill Successor.

Book of Moon and Lance are pretty nice, they double as a card you’d already be running aside from Master of Blades usage, which makes them more viable. We hopefully all know what both of these Quick-plays do so I’ll spare you the extra detail. With Master of Blades they gain an added bonus once you get Blades on the field. Having Master of Blades and Lance set is particularly hard to deal with during the opponent’s turn because it gives you a large amount of control. Once Master of Blades is out, the opponent really only has 2 options: Mass destruction/removal or attacking over him. (they can of course target him 3 times but that’d be foolish) Forbidden Lance removes all of these scenarios, it protects against any mass removal cards such as Dark Hole, (although I don’t advise using Lance on Blades if they Dark Hole unless you have a greater plan) Mirror Force, Torrential Tribute etc. and also can lower the attack of any monster that can attack over Blades, standard things being Black Luster Soldier – Envoy of the Beginning and Crimson Blader. You can also target Blades with Lance and negate Lance with Blades effect to destroy a card the opponent controls to interrupt a combo, which is very powerful.

So it can be used like Lance to target Blades and inadvertently destroy a card. (it’s also notable to mention that Blades destruction effect does not target, I killed an Obelisk the Tormentor like that once) It also can be used to prevent monsters from attacking over Blades similar to Lance. What makes it interesting though is its second bit. It can give you some nice boosts, allow any 1800 beaters to attack over Ophion, but it can also allow you to target Blades a second time and destroy another card. So in effect it can destroy a card during the opponent’s turn and then during your turn destroy another card!

Another idea I’ve been working with in a lot of my decks lately is an extracted engine from the Dragon Ruler decks. It’s a small (relatively I suppose) engine that gives you a lot of versatility and power and can be altered and built upon in many ways. It’s pretty standard as far as Dragon Rulers go, and I take no credit for its creation, but for those really unaware of how the deck works read on. Here’s the “engine”:

This engine does a whole lot of stuff compared to its size, which is why Dragon Rulers are so good. Tempest and Redox are the Dragon Rulers of interest, they can make walls and perform general beat down as well as make Rank 7 XYZ when your graveyard is loaded. Dragon Ravine helps to more efficiently load the graveyard as also does Card Trooper. Card Trooper doubles also as a Debris Dragon target, you can revive Trooper with Debris and pay a cost with Trooper to mill even more cards. Debris can also be searched by Tempest’s effect or when Tempest is banished making one of the cornerstone plays:

Pretty simple way to get a Rank 7 without using a whole lot of resources. It also provides opportunity to mill with Trooper as well as 2 Dragons to banish later. (Debris and Ancient Fairy) If the opponent has a field spell you can use Ancient Fairy to get your field spell as well and setup even further. The play can also be altered to make a Level 8 Synchro instead by searching Corsesca instead of Debris and normal summoning it. Corsesca can also be searched via Dragon Ravine. Lastly is Maxx “C” who’s a generally strong card but works as Redox food in the graveyard and can be used for Redox’s in hand effect when Maxx “C” is dead, which is all around helpful especially if this engine is being splashed.

The last thing is I thought of an idea with Debris that was similar, but resulted in a play that puts even more offensive pressure, but requires more setup. Similarly you banish a Tempest for Redox and add Debris to hand, but this time use Debris to revive a Level 4 monster. This way you can make a Rank 4 XYZ, specifically Queen Dragun Djinn and use her to revive another Dragon Ruler and make a Rank 7 XYZ. The benefit this has is obvious in that you get an extra monster (Queen Dragun) as well as the threat of another Rank 7 next turn by using Queen Dragun’s effect again. The major problem with this whole combo is their’s not a whole lot of Level 4 monsters for Debris to revive that are worth while, but there are some.

Ninja Dragons and the Full Circle:

I’m sure you read the title, so you know Ninjas are next. Ninjas bring something strange to the table that people don’t really use with Dragon Rulers, but I thought it only made sense. Use Hanzo to search Super-Transformation and use that to toolbox Dragon Rulers from the deck. It provides control as well as consistency, which is everything I’ve ever wanted. There’s even the Debris Dragons and Dragunity Corsesca as targets for when the opponent prevents their monster from being Transformed.

The real synergy is from everything I’ve said before, because the Ninjas can bring all those ideas together! As I just mentioned earlier, there’s not a whole lot of Level 4 monsters Debris can revive to choose from, but one of them is Upstart Golden Ninja. Upstart is the key to putting all of this together. Upstart Golden Ninja also provides double the utility of the card Skill Successor. Skill Successor is one of the 3 Trap card viable for discarding, (the others being Breakthrough Skill and Mischief of the Yokai) meaning its the optimal discard for Upstart Golden Ninja’s effect, which can get you a Rank 4 XYZ, potentially Queen Dragun Djinn to make a Rank 7 XYZ, Lavalval Chain to setup or even Heroic Champion Excalibur. This also sets up future Debris Dragon plays as well as sets up future by dumping the Upstart as well as searches another Upstart for additional plays.

Ninja Grandmaster Hanzo also has fantastic synergy with Redox since he’s one of the best monsters to “monster reborn” with Redox’s effect. This can allow very easy triple Rank 4 XYZ plays, by reviving Hanzo, searching Upstart and using Upstart to make another Hanzo. Too bad Shock Master is banned, the next best two I could think of where Evilswarm Ouroboros and Heraldry Crest.

With all that I suppose here’s my preliminary deck list. I’ve only just started testing and haven’t gotten the kinks out you could say, but I feel that it shows promise already!

QOTW: Question of the Week?

Thoughts and opinions on the new ban list? Did they too much, too little? What would you have liked to see happen that didn’t? Personally, I’m hoping this means they’ll start banning a lot more cards in the future. I’d like to see cards like Limiter Removal, Honest, Infernity Launcher and REDMD get banned. We’ll see I’m sure! Something I’m pretty sure wont happen but would like to happen is Leviair the Sea Dragon banned, because it invalidates cards being Banished.