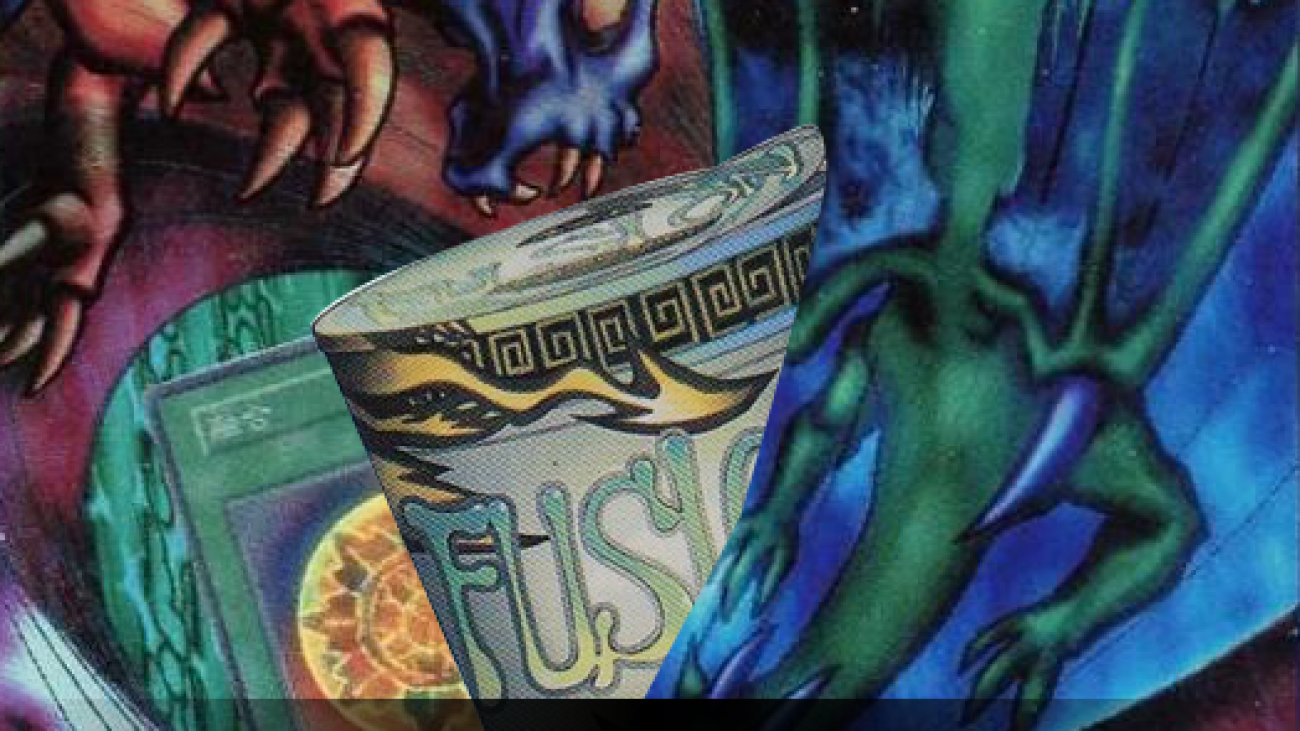 Fusion Summoning gives players the chance to combine two or more monsters into one that is generally going to be more powerful. Because of the risk involved in sacrificing monsters, the Fusion mechanic has gone from a playful and flashy adaptation, meant to appeal to fans of the show, to an integral component of some of the best decks. Here I describe the way Fusion Summoning works as a guide to help you decide what’s right for your deck.

A Fusion Summon is a type of Special Summon, a free summon, and does not count against your once-per-turn Normal Summon. Fusion Monsters are purple and kept in a separate deck, the Extra Deck. You can Fusion Summon as many times as you want per turn as long as you have Fusion Monsters to summon, unless a card effect restricts summoning.

The way a Fusion Monster is summoned looks like this:

The “2 (or more) Monsters part is easy. On every Fusion Monster, it states what other monsters you’ll need to use as Fusion Material to summon it. For a Basic Fusion, which uses Polymerization, your monsters can be in your hand or on the field. More advanced fusions allow you to use material from almost anywhere. There are exceptions to every rule and game mechanic in Yu-Gi-Oh, but these are the general rules for Fusion Monsters that the game uses to operates.

A Fusion Event is any action that leads to a Fusion Monster being summoned. There are 4 Types of Fusion Events:

Activating a spell and having it’s effect summon a fusion monster is by far the most common type of fusion in Yu-Gi-Oh. Take the oldest card, Polymerization, for example. This is considered a Spell Fusion. The Spell’s effect resolving is the event that causes both monsters to fuse. If a Fusion Spell (or trap effect or monster effect) is negated, the monsters you intended to fuse are left in their places. On the field or in the hand, monsters do not go to the graveyard unless the Fusion Spell resolves.

Activating a Trap and having it’s effect summon a fusion monster is not a widely used form of fusion in Yu-Gi-Oh. In fact, there are only a few ways it’s done, Pyroxene Fusion, Fragment Fusion, and Frightfur March. Let’s use Frightfur March as an example since its the most complex option we have. The first effect, the negation effect, negates Book of Moon and destroys it. The next effect sends the targeted Frightfur Wolf to the graveyard. The final effect is a Fusion Event that Special Summons the level 8 Frightfur Sabre-tooth as a Fusion Summon.

This card breaks a rule of Fusion Summoning, kind of. Frightfur March only requires a single monster to summon a Fusion. Even though all Frightfur Monsters are Fusions, so this is technically a replacement, the card still does Fusion Summon a monster.

So now that we’ve done a Trap Fusion and seen that it follows the same process as a Spell Fusion, lets move on to Monster Effect Fusions.

Monster based, or forced, however you look at it, Fusion Summoning is weird. It’s probably the least conventional methods of Fusion, but because of that, it might be the most interesting. Here’s an example of a Monster Fusion Event.

A player wants to summon Superalloy Beast Raptinus, which requires 2 Gemini Monsters to fuse, with the two Gemini Monsters on their field (Gemini Soldier and Gigaplant). However, they don’t have any spell or any trap that can create a Fusion Event. They summon Performapal Splashmammoth, which allows the player to Fusion Summon any Dragon-Fusion during their main phase.

The player activates Mammoth’s effect, which requires that this player’s Fusion Material be on the field. Since Gemini Soldier and Gigaplant are both on the field, the effect resolves, both monsters are sent to the graveyard, and Superalloy Beast Raptinus is Fusion Summoned – easy.

An Inherent Fusion Event is one that does not require an effect to start the process. Simply having the material and declaring that you wish to fuse them is enough. These Fusion monsters will always say “Must first be Special Summoned (from your Extra Deck) by” and “You do not use Polymerization”, so they’re pretty easy to spot.

The interesting thing about these Inherent Fusions is that none of them are actually Fusion Summoned. These monsters are purple, yes, but their specific ways to summon them are strictly Special Summoning, so they avoid any cards that prevent Fusion Summoning specifically.

These Fusions are unofficially-ish referred to as Contact Fusions. You must control the material on the field, though the monsters do not have to be face-up. Face-down monsters must be revealed (not flipped) before a fusion event can resolve to allow both players to verify that the fusion material is valid.

Let’s look at an example.

In order to carry out the Summon, the player reveals the face-down Bestari and, as stated in the card text of Gyzarus, returns both Bestari and Darius to the deck, then places Gyzarus on the field. All the steps of an effect based fusion are carried out with no need to activate another card to do it, the player met the conditions to make the fusion happen.

The main difference is that Inherent Fusions use up the cards immediately, as if the Fusion was successfully performed, so it’s a riskier. With an effect based Fusion, if your opponent negates the spell, trap, or monster effect that initiated the event, then it ends there, and you lose nothing but that initial card.

On the other hand, Inherent Fusions require one less card to be performed, they are more automatic because all that you need are the fusion material monsters on the board. However, there are only a handful of Inherent Fusions [Ritual Beasts, Gladiator Beasts, Chimeratech Fortress Dragon, Neos Fusions, etc], and their play-ability is very influenced by the metagame.

The summon of Inherent Fusion can be negated before they hit the field by cards like Thunderking Rai-Oh, Solemn Warning, and Steelswarm Roach. They can also be responded to by cards like Bottomless Trap and other cards that activate when a monster is summoned, while monsters summoned through the effect of another card have a little more protection. Their summon cannot be negated, only the effect of the card used to initiate the fusion event can be negated, but of course, once they hit the field, they are vulnerable to the same when-summoned traps. Example of a Fusion Substitute Monster

Cards like Instant Fusion and Cyber Stein, Magical Scientist and Summoner of Illusions can summon our purple friends from the extra deck without the need to have any of the fusion material.

Fusion Alternatives are all going to be Effect Based (Spell, Trap, Monster Eff) Fusions or Special Summons, and it’s important to figure out which type of summon (Fusion/Special Summon) the card is providing. For example, some monsters can be Special Summoned any way you choose, but must be Fusion Summoned in strict ways.

If any questions come up while your reading this, perhaps it’s of a specific situation or card, feel free to leave it in the comments or reach out to me on twitter @mattcarterwa. But most of all, if you found this article interesting or helpful, let me know in the comments or like the page!