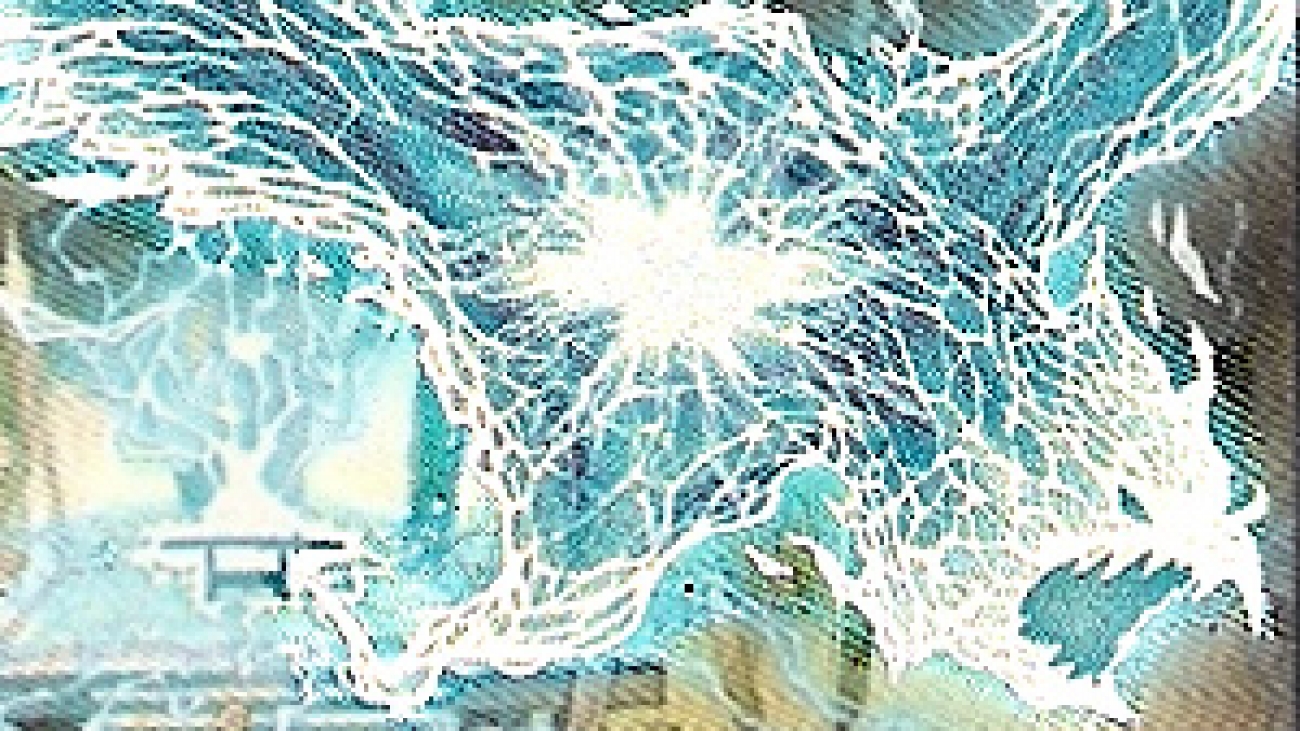 ‘Sup everybody, today I’ve got an article about a card recently released in Cosmo Blazer: Lightning Chidori. I’m sure most people looked at this card and thought something along the lines of “wow, this effect is really good, but how am I supposed to summon this?”. Hopefully, in this article I can answer that question by giving you some ideas for effective way to summon the great and powerful Lightning Chidori.

First off, for those who don’t know we’ll have a little showcase of Chidori’s effect and stats etc. Here’s the effect:

Quite simple an effect, and one of few XYZ monsters to have a trigger effect upon their summoning, which is always good. I most cases it will act as an all purpose removal/control card for face-up cards on the field and also an answer to back-row upon summoning. It has a meager 1900 ATK and 1600 DEF, which is respectable when it comes to battling level 4 and lower monsters, but anything bigger and its stats seem kind of low, especially since a lot of the monsters you might use to summon it could have higher or near equal stats to begin with. (of course you make the attack trade off for the powerful effect in most cases)

I’ll start off with the first and most obvious way to make any XYZ monster: Rescue Rabbit. Most people immediately think of it when a very specific XYZ is released and that’s always a good idea, but it usually takes some time to find the most effective Normal Monsters for the job and it also takes time to figure out if it’s worth it or not. There’s 4 monsters that I think have potential to be used in the summoning of Chidori here: Luster Dragon, Nin-Ken Dog,  Mist Valley Watcher and Harpie Lady.

Using wind monsters with Rescue Rabbit also brings another advantage through the card Quill Pen of Gulldos. (it returns 2 Wind monsters in grave to the deck to bounce a card you control to the hand) With Quill Pen you can potentially run only 1 set of 3 normal monsters in your deck because you can return them to the deck with Quill Pen. Of course once Daigusto Emeral comes out running 1 set of normals will be even less of an issue since you can just shuffle them back into the deck with him as well.

Luster Dragon is simply the strongest Level 4 Wind Normal monster in the game, making it the most immediate thought for the job. 1900 is good even when drawn since it can control the field and crash with T-King. Being a Dragon doesn’t lend a whole lot to it though; here’s all the advantages that being a dragon bring that I could think of:

In my opinion this is probably the most ideal of the Rabbit targets simply because he’s multi-purpose. Multi-purpose in what way you ask? Nin-Ken Dog is actually a Beast-Warrior, Level 4, Wind, Normal Monster with 1800 ATK to boot. All that together seems like some match made in heaven because this allows it to fill an almost perfect niche in the Fire Fist Rabbit deck. By sacrificing 200 ATK by switching from Gene Warped Warwolf to Nin-Ken Dog you gain access to a ridiculous removal monster. It’s a trade off that I’m willing to take.

You can also make a similar case for Cyber Falcon, a Level 4, Machine, Wind, Normal Monster since he can be used to go into either Chidori or Geargiganto X, but unfortunatly he has a shallow 1400 ATK and has to fight Mechanicalchaser which has some awesome synergy in that dack due to Black Salvo. Cyber Falcon can atleast get an honorable mention though.

I group these two together since they’re the only two Normal Level 4 Wind monsters that belong to an archetype. (some people may be thinking, isn’t Harpie’s Brother better than Harpie Lady? but I should inform you that it doesn’t count as a Harpie card since the OCG card doesn’t actually have “Harpie” in the name, similar to the situation surrounding “Frog the Jam”) The benefit of them being in an archetype is they gain the support of all the cards in the archetype as well.

Harpie Lady has the most obvious uses with all that new support coming out in the next set. It gets Harpies on the field for Elegant Egotist. It loads the graveyard for Hysteric Party. It summons Harpies for Harpies’ Hunting Ground. Not to mention they get a specialized XYZ in the next pack. It’s not necessarily the best idea since Harpie Lady kind of sucks and running it disallows other cards like Cyber Harpie Lady or Harpie Lady 1, 2 or 3.

Mist Valley Watcher is a little less obvious, but once you see why you’d use it it makes more sense. The biggest advantage it gives is that it makes a few more 3 card OTKs in the Divine Wind of Mist Valley deck. With the Field Spell + Rabbit + Genex Ally Birdman or Mist Condor you can make some mean plays that swarm or control plays with Chidori. Once again, not the best idea since it’s kind of a bad monster, but it has far more legitimate stats than Harpie Lady, and compared to Kabazauls the 1500 ATK and 1900 DEF Watcher has seems pretty good. (it’s also a spellcaster making 3 spellcasters in the Mist Valley deck: Watcher, Blastfan and Summoner Monk potentially giving you the option to do things I don’t want to think about now)

I’ll use that as a segue to talk about another deck that has potential to summon Chidori and that’s Genex/Mist Valley. I combine the two together since it can be hard to separate the two, but it’s mostly Genex monsters. The deck already has lots of potential monsters to be used to summon Chidori with, all that’s required to summon it is some deck and play alterations to make it so. We’ve got the obvious, Genex Blastfan, Reborn Tengu, Mist Valley Falcon, Mist Valley Soldier, Mist Condor and even a random Stratos.

With the desire to run level 4 wind monsters, it now becomes a possibility to think about some lesser thought of cards like R-Genex Accelerator or R-Genex Turbo (a personal favorite of mine). Both of which monsters can allow you to make Chidori’s at the end of a lot of your plays using Genex Ally Axel. I’d rather now explain the intricacies of this deck in this article, so I wont explain any these monsters effect since there’s so many things that can go down in the deck. If you really want to know more about the deck, I guess you can comment and ask for more?

Moving along to probably the wildest of the ideas I had for Chidori. This idea spawned from what initially was a horrible idea, until I made it feasible, but whether or not it will work is questionable. What started my search that brought me to this point was the thought that if there’s a level 4 wind monster with less than 500 ATK, you can revive it with Debris Dragon to make a 1 card Chidori, which would be fantastic right? Well, my search ended quickly as I found that there’s exactly 2 monsters in the entire game that meet that criteria: Armored Cybern and Gladiator Beast Secutor.

Armored Cybern is a really weird card. It’s a Level 4 Wind Machine with 0 ATK and 2000 DEF. So fairly respectable stats at first. It’s a Union Monster that can equip itself to only Cyber Dragon or a Fusion that lists Cyber Dragon as Fusion Material. You can lower the equipped monster’s ATK by 1000 once per turn to destroy a face-up monster. Honestly, I couldn’t think of any good ideas to use this card for, but if you think of a way to use it, just remember that Debris Dragon can use it very well.

More important than the Cybern is Gladiator Beast Secutor and Gladiator Beasts in general. The deck actually houses quite a few level 4 Wind monsters making them the perfect platform for Chidori’s summoning. They have Gladiator Beast Bestiari, Equeste, Lanista and of course Secutor. Lanista is kind of bad, so I wouldn’t recommend it, but the other 3 are all commonly run. If you just focus the deck around getting a play with Secutor much earlier in the game it can setup a lot of Chidori plays for later. Secutor’s effect itself will likely summon a Chidori, Herkalinos or Gyzarus, and then if you just let Secutor go to the graveyard you can revive it with Debris for a quick Chidori. While it may not be the best idea ever, I thought it was kind of cool to note.

The last deck is a new deck, you may have heard me talking about it on the podcast. Heraldic Beasts are probably better than any other deck at summoning Chidori that we currently have. They have 3 Wind monsters: Heraldic Beast Aberconway, Twin-Headed Eagle and Bernard’s Falcon. The last two aren’t that great, but Aberconway pretty much cranks out Rank 4’s by himself. I spoke on him before in a previous article about my Ninja deck so I wont explain his effect (go check that out if you want to know). Here’s the basic plays:

That’s all I’ve got for now, hope you enjoyed these ideas! See ya next week.