by Kyle
with 4 comments
ArticleUncategorized

Your opponent goes first. He sets 3 cards and Normal Summons a monster. Hmm, what are those looming face down cards my opponent just set? Are some of them bluffs? What spells and traps could a deck like this be running? All valid questions that a competitive player needs to know for success. So, how do figure out the answer to these kinds of questions?

Hello, and welcome to my first installment of “Tips for Competitive Play”. I’ve seen in it on some other YouTube channels and blogs etc. and I like the idea. In this segment I’ll be trying to talk about things that are important to playing competitively that may not be initially apparent. For the first one I’ll be talking about players projecting and how to deal with those pesky set cards. So let’s get into it.

The first and most simple way to know how to deal with an opponent’s spells and traps is by knowing the meta-game or “the meta”, a fancy and much simpler way of saying the group of decks that are commonly played at large competitive Yugioh events. One thing I do regularly is look at the decklists from the Yugioh Championship Series (aka YCS)  on the official strategy site and even decks from Japanese tournaments on websites like Shriek.  Getting to know decks and what they run is a very simple way to become knowledgeable and predict and opponent’s plays. By knowing and assuming what spells and traps an opponent may run you can more easily know which plays are safe and unsafe for you to make. Also, getting to know the common spells and traps people run can also help you predict even what a rouge deck (a deck that isn’t seen competitively on a regular basis) would likely to be running, but that’s not where it ends.

After knowing what cards your opponent could be running the next step is looking for clues on the field and even in the way your opponent played cards. The clues are commonly referred to things the opponent is projecting. Some deck types and specific cards project more than others and some less so and even some very good players can make false projections to try to confuse you. Here’s some examples:

In a Gladiator Beast deck a card that players tend to project is Gladiator Beast War Chariot. Since it’s conditions for activation are that you must have a Gladiator Beast(GB) on the field it can become very apparent if they have a War Chariot by the way they play there monsters. If the player really wants to stop your monster effects than they will be willing to go out of there way to keep a GB face up on the field. When playing a deck like GBs a competitive player will try to keep an eye out for things like this.

Another card that people project (even if not on purpose) is Mirror Force. As me and Matt have spoken about on the podcast before, people really don’t like activating Mirror Force without killing 2+ monsters with it and this can be used to your advantage. One of the biggest ways a player projects is by not playing a card. When a card stays face down for multiple turns its activation requirements can become more apparent. For cards like Mirror Force or Dimensional Prison you must attack for them to activate them; so if you’re not attacking and an opponents card continually looms face down then it’s more possible that it’s a card like Mirror Force. By continually not meeting its activation requirements the card will continually remain un-played giving clues as I said before. In the case of Mirror Force, like I said, people like to kill 2 monsters or more with it so people might not activate it if you attack with one monster. So if you notice a card continually going un-played but you’ve only been attacking with one monster you may want to be wary if you are now about to attack with 2 monsters. Sometimes you can just feel a Mirror Force a commin’.

Another thing that’s important about knowing what cards are set is to help you not make a play that could cost you the game. It’s important to understand things like “if they activate Dimensional Prison on my Stardust Dragon then I could lose control of the game.” A lot of newer players can rush into some set spell or traps and quickly find they’ve already lost the duel. Understand the consequences that each card your opponent could have set upon your chances of victory. Frequently for me, not attacking for multiple turns in a row has won me games because the opponent couldn’t get rid of my monsters with cards like Dimensional Prison.  One of the most important cards to keep in mind is Solemn Warning. A lot of times if an opponent activates Solemn Warning and you have no back up to that summon the game might as well be over. Think about bating it out with another less important summon or maybe setting a monster instead. It’s very important to know the consequences of each card.

The last thing to know, which seems rather obvious, is to know the odds. Even though the odds frequently don’t go right it’s helpful to know what they are. What I mean is that by knowing the cards in your opponent’s deck it’s good to know if it’s likely or not that they have specific cards. (You don’t need to know any actual percentages or anything, but if you figure that out by all means use it Mr. Genius) If a player runs 3 of a card in there deck (assuming they have a 40 card deck) then it’s about a 50/50 shot they got it in there opening hand, so in most cases I assume they have that card in there opening hand.

Let’s see if we can use all this information in an example. Here’s the situation: Your opponent goes first, plays Pot of Duality revealing Mirror Force, Torrential Tribute and Dark Bribe. They grab the Mirror Force. They next set 3 cards and set 1 monster and then play Necrovalley. They follow this by playing Royal Tribute discarding all of your monsters. Well, that sucks for you in terms of how the duel is going, but what can you draw from the situation? 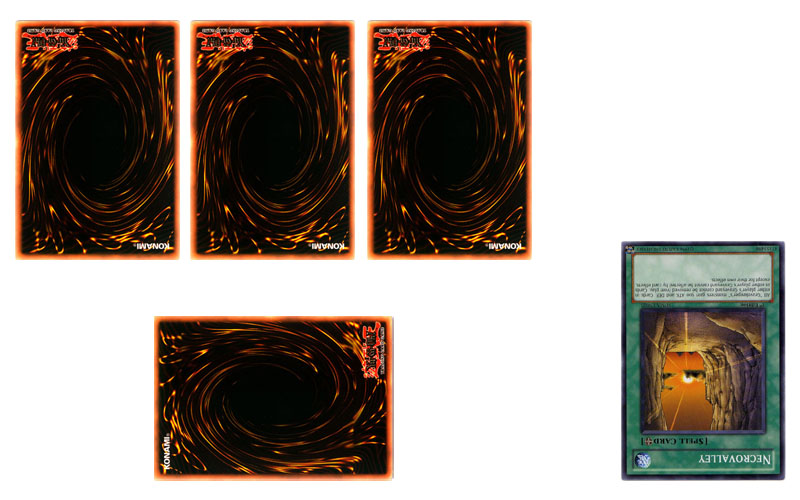 Here’s some things we can notice when watching this opening:

So if I had to make a guess on all that I’d say it’s a Spy, Dark Bribe, Mirror Force and a Solemn Warning. Not to say my methods are foolproof of course; I could be wrong, they could have a Gravekeeper’s Stele and a Duality face down with there Mirror Force. Whatever the outcome, it’s good to be thinking about what your opponent is doing. Practice this when dueling with friends and at locals it can really help on the competitive scene.