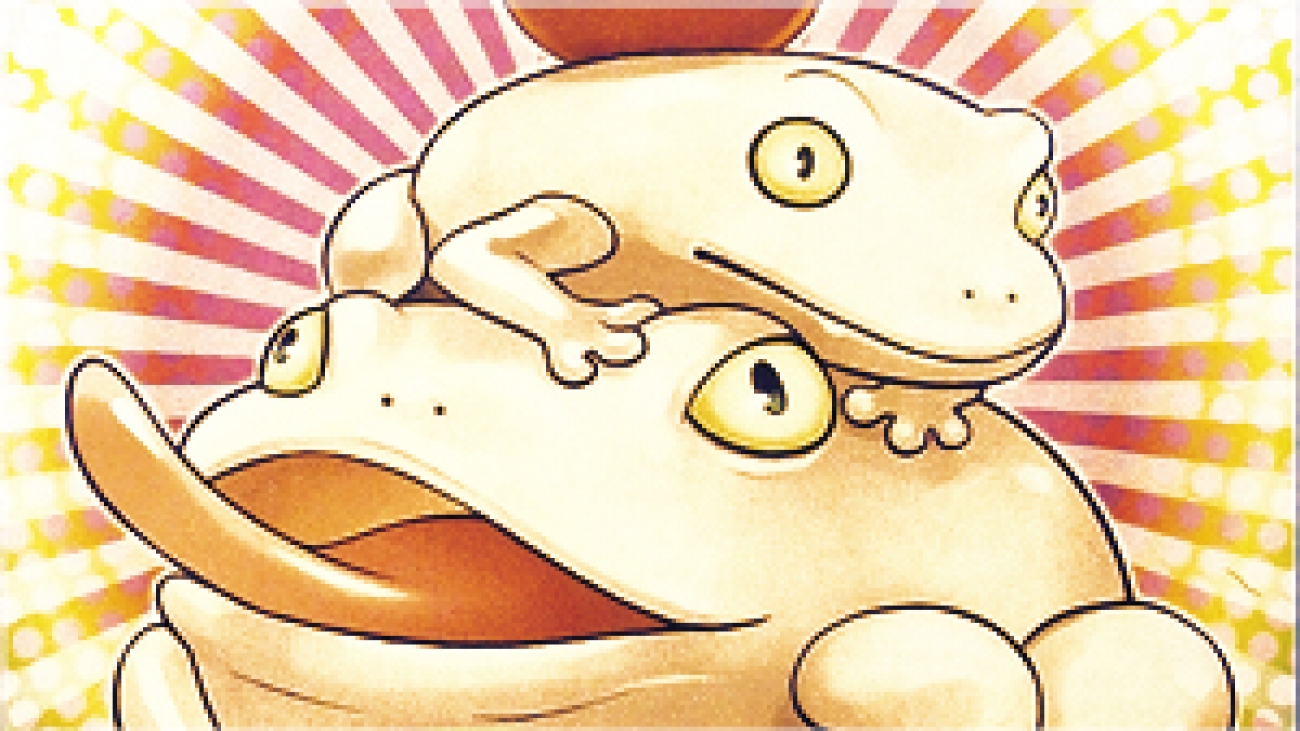 Welcome to the swampy trenches.

Being released in the upcoming set, Invasion of Venom, is a new Frog support card, which we haven’t had in quite a while. As the resident Frog guru I’m required to comment on this card. That being said, I actually think this card is very potent and meta defining and something I personally like the design of. Certainly this card is a bit overpowered, but that doesn’t mean it’s not going to exist in a couple weeks right? Once per turn, during the Standby Phase: You can detach 1 Xyz Material from this card; Special Summon 1 “Frog” monster from your Deck, except. Once per turn, during either player’s turn, when your opponent activates a Spell/Trap Card, or monster effect: You can send 1 Aqua-Type monster from your hand or face-up from your field to the Graveyard; negate the activation, and if you do, destroy that card, then you can Set the destroyed card on your field. If this card is sent to the Graveyard: You can target 1 WATER monster in your Graveyard; add it to your hand.

Clearly designed to be a powerhouse for Frog decks. In Frogs specifically this card finds a lot of power, having access to an effect that special summons a Frog monster from the deck each turn, which certainly increases the viability

The card is divided into 3 effects: the Negation effect, the Frog effect, and the recursion effect. Each of the different effects is very good and has value in different instances. I’ll go over the use of each effect, but start with ways to summon Toadally Awesome and what decks are best.

The first way to use Awesome Toad is the obligatory way, meaning summoning outright with 2 Level 2 Aqua monsters. This really doesn’t include a whole lot of monsters or methods, mainly 2: Frogs and Paleozoics. There’s also the use of singular methods which I’ll also get into.

The clear way to use this card upon first read is in a Frog deck. Utilizing the easy special summoning of Swap Frog plus Swap’s dumping effect you can set up Ronintoadins and easy make Toadally Awesome. Frogs also very effectively utilize Awesome because they gain value out of all three of Toadally Awesome’s effects. In general I’ve been running on this engine for Frogs:

All that’s really neccessary for Toadally Awesome’s summoning is Swap Frog and Ronintoadin, but in general you’ll want more Frogs in order to more consistently special summon Swap Frog from the hand and also so you have a lot of Frogs to banish with Ronintoadin. Also, you want to have more WATER monsters in hand in order to negate cards with Awesome, because Toadally Awesome requires discarding a WATER monster to negate. The natural progression would then be to run the best of the Frogs to fill out the engine. Dupe Frog is a generally good card, and worst case scenario you can set it and it has a 2000 DEF booty. Dupe Frog also has very good and natural synergy with Toadally Awesome, being the ideal monster to summon during the standby phase with Awesome’s effect. This prevents Toadally Awesome from being attacked and gives a usable monster to dump for Awesome’s effect, and even if the opponent gets over your Dupe Frog it gives you a Frog from the deck, which gives you yet more ammo for Toadally Awesome.

Next, you add the non-mandatory Frog support depending on how robust a Frog engine you can fit in your deck. Of the extra frogs I would say you first add Flip-Flop Frog. Mostly useless if you draw it, the main purpose being special summoning it during the standby phase with Toadally Awesome’s effect. With the possibility of easily setting up soft attack locks with Dupe Frogs, Flip-Flop Frog becomes a very powerful monster. If you can set up a single Dupe with a Flip-Flop you can return two of the opponent’s monsters to the hand every turn and attack with Treat and Flip-Flop every turn with really no investment. Then, you could potentially add Unifrog, which is essentially just a free MST when neccessary. Typically during your own standby phase you’ll special summon out the Unifrog with Awesome, allowing you to pressure the opponent’s backrow almost freely. Worst case scenario for both of these Frogs though is that you can turn them into fodder for Swap or Ronintoadin in order to make more Toadally Awesomes, making them rarely dead.

Formerly referred to as Burgestoma, now called the Paleozoic since their translation into the TCG, Paleozoic is an archetype based around simple Traps that turn into normal monsters. All the cards in the archetype, bar the Extra Deck monsters, are traps that all have the same effect:

Once per Chain, when a Trap Card is activated while this card is in your Graveyard: Special Summon this card as a Normal Monster (Aqua-Type/WATER/Level 2/ATK 1200/DEF 0). (This card is NOT treated as a Trap Card.) If Summoned this way, this card is unaffected by monster effects, also banish it when it leaves the field.

Basically, if you’re running some other WATER type monsters, then Paleozoic now makes quite the good fit with the deck as a trap base because the Paleozoic monster provide generic trap card defense through things like spot banishing, attack manipulation, and flipping monsters face-down. For an extremely oversimplified example, I could make a fish deck and run a bunch of normal fish monsters and go for a beatdown with the fish, supplemented by attack manipulation and spot removal from Paleozoic. Then, when I summon a slew of Paleozoic traps from the graveyard, I can then make Toadally Awesome and use the vanillas as fodder for his effect. This idea also has some other merits that I’ll get into in a moment, but clearly it’s not completely optimal.

Next are single cards or simple ideas that can functionally summon Toadally Awesome that are an archetype, the first being Graydle Slime Jr. Slime Jr is a new monster from Invasion of Venom, coming out along side Toadally Awesome, as if beckoning you to use it in this manner. Here’s the effect:

The destroyed by battle effect is a fine effect, but for the purposes of this article it can be ignored so I won’t be talking about that effect and its potential usefulness given a more robust Graydle deck, considering that that doesn’t apply. What’s important is that Graydle Slime Jr can provide a quick and easy one card summoning of Toadally Awesome and additional synergies.

It’s very simple, Normal Summon Slime Jr, use Slime Jr to revive another Slime Jr, XYZ Summon a Toadally Awesome with the two. It doesn’t stop there though because there’s actually quite a bit more synergy. In the Frog division, this card actually has an added bonus, because Slime Jr is a level 2, Aqua, WATER monster it meets the requirements for Swap Frog’s effects. First, it can be discarded to special summon Swap Frog, this allows you to easily setup another Slime Jr in hand, but this may not always be that useful considering Swap Frog’s effect can send a Slime Jr from your deck to the graveyard as well. Swap Frog doesn’t just send Frogs to the graveyard, it can actually send any level 2 or lower Aqua monster from your deck to the graveyard (it was designed this way so you could also send Ronintoadin to the graveyard because Ronintoadin doesn’t have “frog” in its name). This means it’s really easy to setup a Graydle Slime Jr for Frogs.

This concept is less relevant because of the TCG ban list, but it has really taken the forefront in the OCG. The only other realistic way to summon Toadally Awesome with 2 Level 2’s is with Normal Monsters. There are a good handful of Level 2, Aqua, WATER type, Vanilla monsters to choose from, the highest attack ironically being Frog the Jam with a whopping 700 ATK. Vanilla monsters can be moved around extremely easily, allowing probably the next quickest access to a turn 1 Toadally Awesome aside from Frogs. Also noted, Konami made mention of Frog the Jam getting a name change, likely in a Astral Pack or whatever they’re called it’ll be changed to something like Toadjam. I’ll say I’m calling it now, but that would sure help out all the Frog cards which always have to mention Frog the Jam.

There’s a handful of cards of value here, one of the most important and well known is Rescue Rabbit. Rescue Rabbit is allowed at 3 copies in the OCG but only 1 in the TCG, which is rather unfortunate, but even in the case of the TCG if you’re going to run a Vanilla engine you might as well be running the one Rescue Rabbit. Rescue Rabbit can summon 2 Frog the Jam from your deck and instantly make a Toadally Awesome. This alone doesn’t make it valuable enough to run Vanilla monsters, but that’s when the card Unexpected Dai becomes more valuable. Unexpected Dai is a Normal Spell with this effect:

If you control no monsters: Special Summon 1 Level 4 or lower Normal Monster from the Deck.

This allows you to summon a Frog the Jam from the deck and then simply normal summon an additional monster in order to make a Toadally Awesome.  Simple enough.

Here’s some other Normal Monster support cards of note:

I’ll give special mention to Tri-Wight which special summons 3 level 2 or lower Normal Monsters from your graveyard, which is pretty insane in regards to the existence of Toadally Awesome.

To the forefront immediately comes one of the flaws in Toadally Awesome’s card design, being that it doesn’t require any XYZ material to use its most important effect, the negation effect. This means that Awesome has near perfect synergy with Bahamut Shark.

Here are three decks that this could come into play with in the competitive scene in the future:

Then there’s some weird decks which don’t get a whole paragraph of dediction, but at least they get an honorable mention right?:

Then there’s also decks that run 1 Level 4 WATER monster that can perform the combo with Instant Fusion and Norden: