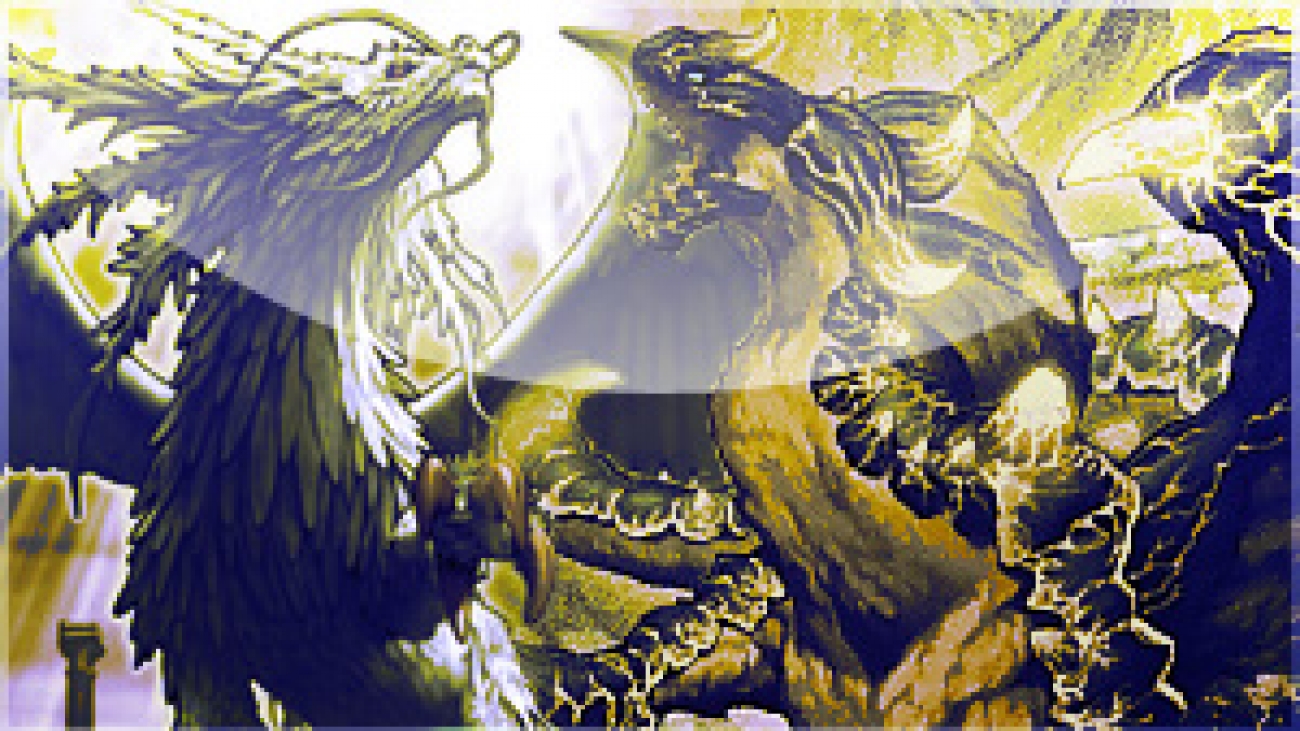 On the horizon is Lightsworn support. Not just in the Lightsworn structure deck, but in the form of lots of really good graveyard support cards.

I’ve been looking at all this new stuff and theorizing how is best to use it since it all seems so good, I’m afraid I might even have to push my deck way above 40 cards. Today I’m just going to expound on some of these new cards.

First, the most imminent and obvious support is the direct support, the new monsters from the structure deck. We get Raiden, Lightsworn Assailant, Minerva, Lightsworn Maiden, Michael the Arch-Lightsworn as well as some unknown Spell card called “Lightsworn Sanctuary”.

Michael makes a pretty evident splash into any Lightsworn deck’s extra deck. It’s not that game changing of a card, I mean it affects the deck, but it really has no effect on how you build the deck, it’s more like some whipped cream on your coffee or the cherry on top. It’s an incredible card for the deck, but I rarely think about ways to utilize it. Raiden on the other hand alters the deck wildly and opens up a lot of new avenues for how t make your Lightsworn decks. Raiden is a really simple monster, he’s a Level 4 Tuner and has 1700 ATK so he’s also a beater. Once per turn he mills 2, and in the end phase he mills 2 so basically he’s just another milling robot like Card Trooper. The fact that he has an effect that mills during your turn and not during the end phase is huge! One of the biggest shortcomings of Lightsworns is that they have to wait at least one turn to make any plays because they mill in the end phase and then this brings an allowance for plays because the deck’s cards move with a graveyard reliance. This means that unless you open with Solar Recharge or Charge of the Light Brigade you would inevitably burn a turn to provide setup. Raiden increases the odds of you milling on your first turn by a lot, and even if you don’t end up making a play on your first turn he’ll mill more cards than any other Lightsworn in the deck would, milling 4, on par with Judgment Dragon.

Because of this feature, Raiden can replace all extraneous Lightsworn names the deck may be running. To me this means no more Garoth, Jain and Ehren and to a degree Gragonith, but Gragonith serves a very special purpose and provides a lot of unique outs that otherwise would be absent without running it, that’s why I say “to a degree”. You could feasibly run 3 main decked names: 3 Lyla, 3 Lumina and 3 Raiden, and be able to get away with it because Lumina + Raiden can synchro for Michael making your fourth name for JD, but that’s a little inconsistent. Because of that, my new simplified engine using Raiden is this:

Ryko sneaks in their as the last name. Honestly, Ryko is not a very good card, but he provides an out to almost everything if need be so putting the one name in the main makes sense to me. Ryko is also is a great card to run in the side, so I usually have a combination of 3 in the main and side in every Lightsworn build for its utility. Shire is for Debris targets, I always want at least 3 targets in the deck (Shire and 2 Troopers) and Debris to revive Shire to summon Michael ladders Lightsworn names really fast and can generally make you win the duel if they don’t have Bottomless Trap Hole or Solemn Warning.

Speaking of Synchro Summoning, Raiden is also a Tuner monster, providing a ton of Extra Deck utility. Raiden is level 4, allowing all the same Rank 4’s, but he’s also allowed to summon bunch of Level 8 Synchros. This helps a lot in game 2 when people side in cards like Light-Imprisoning Mirror. Normally, under Light-Mirror every Lightsworn becomes useless, but Raiden still provides a lot of opportunity to break through floodgate cards using Scrap Dragon or Black Rose Dragon. He also gives a lot easier access to Star Eater, and if I feel like running it, Colossal Fighter for when you get locked under Skill Drain.

Specifically for Synchro Summoning, Raiden opens up Lightsworns for a new build that utilizes the Baby Chaos Dragons: Collapserpent and Wyverburster, instead of Dragon Rulers a a build. To banish Eclipse Wyverns you instead summon Collapserpents and you can Synchro with them and Raiden for Level 8 Synchros. When the Baby Dragons are Synchroed with they still can search making some really nice advantage.

The Baby Dragons work especially well with Minerva. Minerva is a Level 3 Tuner, meaning that with a Wyverburster she can Synchro into Michael which ladders Lightsworn names, and also loses no advantage. In addition, when Minerva is Normal Summon she searches a LIGHT Dragon-type monster with a level less than or equal to the number of different Lightsworn names in the graveyard. If you have 4 different names in the graveyard, she can simply search the Wyverburster from the deck, making a 1 card Synchro and then adding the Collapserpent from the deck to the hand for free. Then Michael can use his effect to banish a card and essentially you’ve gone plus 2, which is pretty fantastic I might say. The next card of note is Kuribandit. Everyone is pretty gaga over this card already, so I don’t think I need to explain much. Bandit actually comes out this week, so he’ll get the first real world testing. Kuribandit is a Level 3 DARK Fiend with 1000 ATK and 700 DEF. Here’s his effect:

During the End Phase, if this card was Normal Summoned this turn: You can Tribute this card; excavate the top 5 cards of your Deck, you can add 1 excavated Spell/Trap Card to your hand, also send the remaining cards to the Graveyard.

It’s pretty clear how this card is good in Lightsworns. It mills 5 cards and if one of them is Solar Recharge or Charge of the Light Brigade you can add it to your hand. I equate this to being a Cardcar D for any graveyard based deck.

This card has a lot of facets to it that are fantastic as well. First, it’s DARK meaning it gives an allowance for Chaos cards. This makes summoning Darkflare Dragon and Lightpulsar way easier. It also allows you to run Allure of Darkness because with 3 of this in the main, at least for my build, you’re running 10 DARK monsters. You might even be able to run Dark Armed Dragon again!

One thing I disagree with though, is that everybody seems to think that for some reason this card has to go along side Tour Guide from the Underworld. I’d like to say I will most definitely not be running any Tour Guides in my Lightsworn deck because it doesn’t actually do anything to move the deck forward. Maybe if I made a Chaos Dragon deck, that was purely Chaos Dragons, meaning no Judgment Dragons in it, I would run Tour Guide. I’l admit I’d like to try that deck out, but I don’t think Tour Guide has a place in Lightsworn decks.

The last thing that makes this card so fantastic is the ramifications game 2 and 3. First, it’s DARK and it tributes itself; this means that Kuribandit is immune to both Skill Drain and Light-Imprisoning Mirror. This makes Dragon Rulers and imminent threat under both of those cards. Second, this card lets you see any side decked Spell and Trap cards way faster than normal. It specifically works well with MST because you can still activate MST in the end phase after adding it to your hand with Kuribandit.

I’ll end it with that for this week, I’ve got to get my homework done!

What’s you favorite card from the new set Dragons of Legend? What do you think will have the most interesting impact on the game? What card do you look forward most to using?

Personally, I really like the new Blackwing cards and I think they add a lot of interesting plays to the deck and I’d like to get my hands on them.